‘We do this for love’: Waterworks Players portray life on stage 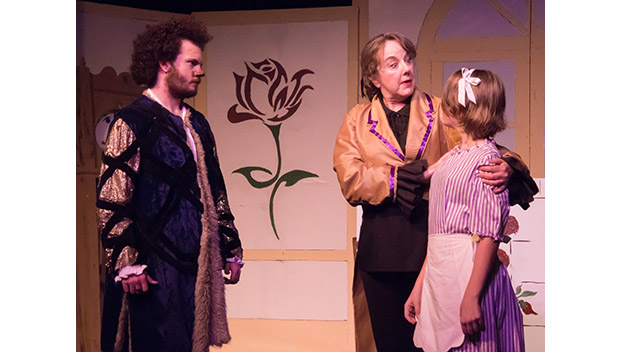 A look at “Beauty in the Beast", from the 2016 season of the Waterworks Players.

FARMVILLE – Food, water and shelter are the basic human needs for survival. However, a group in Farmville, the Waterworks Players, will argue that theatre should be an addition to the list.

The Waterworks Players have brought theater to Farmville for nearly 50 years. The group was started by Dudley Sauve in the 1970s when he started doing theatre productions at Southside Virginia Community College in Keysville. The group moved to the lower dining hall at Longwood University, where Sauve was a professor, before moving to an old water treatment plant in the 1980s that is now home to the Farmville Fire Department. Here they got the name Waterworks.

“We’ve been around for 45 or 48 years, depending on when you want to start counting, which is pretty exceptional for the theatre,” said Leigh Lunsford, president of the Waterworks board of directors. “It’s a testament to the folks who love the theatre and help keep it going.”

Before finding their permanent home, Waterworks performed out of the building that now houses Six-Shooters before buying the Old State Theater on Main Street in Farmville in the 1990s. Unfortunately, an ice storm caused the roof to cave in and Sauve traded the theater for the town for the property they now occupy. In 1996, the group put on their production of “The Fantasticks” in its newly built theater.

“I walk around town and people always ask me about the new show or auditions,” said Sauve. “People are aware that we’re here and it’s great.”

Waterworks has had some notable performers over the years, including Steven Colbert who performed in “The Good Doctor” in 1984 while he attended Hampden-Sydney College. Others have also furthered their acting career, including one actor who after performing in Warterwork’s “South Pacific” went on to perform the same play in New York City. According to Sauve, he enjoys seeing people succeed.

“It’s a great opportunity as a small theatre for people who want to try something new to do so without the pressure of being a part of a big team,” said Anna Stinson. Stinson hopes to one day pursue acting professionally. She loves the opportunity Waterworks gives her to experience acting and grow in her talents while still in a comfortable setting.

Waterworks puts on a variety of shows each season. In years past they have done everything including musicals, dramas, comedies and more. However, since COVID-19, the group hasn’t returned to musicals quite yet and is focusing on comedies and other uplifting productions to not add to the heaviness in the world today. They plan to bring musicals and dramas back soon.

Of all the productions, no production is quite like the Waterworks pantomimes. Pantomimes are children’s plays that are performed around Christmas that are usually retold fairytales filled with humor the whole family can enjoy. These are popular in Britain and have been a fan favorite in Farmville too.

“The first pantomime I saw was “Snow White and the Seven Dwarves” and thought it was very cool,” said Kolby Logue, who is now on the board of directors. “At 16 I was cast as Belle in “Beauty and the Beast” and I was hooked. I’ve been in as many productions as I can ever since.”

More than a hobby

For the Waterworks performers, theatre is more than a hobby. Especially in a small town like Farmville, doing live performances gives the players the opportunity to bring art to the community while also expressing their talents.

“I know for me, this has opened up a whole different world of opportunities to experience,” said Jordan Whiley, performer and director with Waterworks. “I feel like it is part of my responsibility to share my talents and gifts because what’s the point if you’re not doing anything with them?”

Those interested in learning more about Waterworks can find Waterworks Players on Facebook for updates on upcoming shows and auditions. Folks can also visit waterworksplayers.org for more information and to buy tickets.

“We do this for love, life and existence,” said Sauve. “Why do you eat? Why do you go on stage? Because it’s life.” Despite being 93 years old, Sauve has no plans on stopping his involvement with Waterworks. “I still have a few more years to go.”

Twelfth Night next for Waterworks Players

The cast this time around is a blending of old and new faces. Among Waterworks veterans are Christy Moore (Maria); Don Blaheta (Sir Andrew); Leigh Lunsford (Malvolio); Anna Stinson (Orsino); and, returning to the Waterworks stage after an eight-year absence, Jay Lynn (Sir Toby).

There are also several “newbies” making their Waterworks debut: James Shepherd (Feste); Melissa Meinhard (Olivia); Sarah Varela (a servant); and Logan Schock (Fabian). Though he previously appeared in Repunzel (a panto) some time back, Twelfth Night is his first full-length, “adult” theatrical experience.