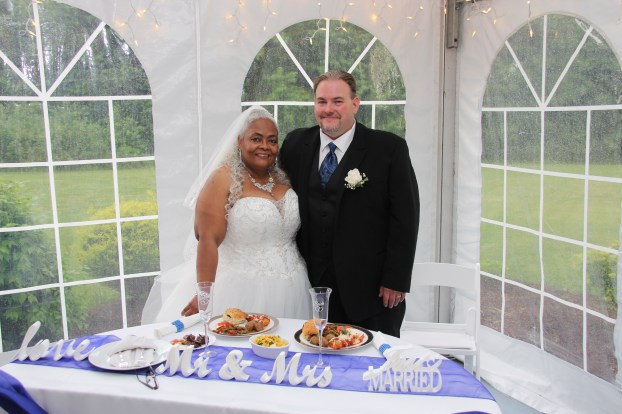 Regina and Steven Goard were married June 20 at Amber Grove in Moseley by Pastor Thomas Armstrong of Cedar Baptist Church.

Mrs. Regina Goard is a Corporal in the Virginia Defense Force as well as a Programs Support Tech in the VADOC. She has a master’s degree in Criminal Justice with the concentration of Homeland Security. She is the daughter of the late Sandra Foeman and James Harris II, a U.S. Army veteran. Regina has two daughters, LaShaunda and LaTasha Harris and a grandson, DeMacieo Lewis.

Mr. Steven Goard is an Information Processor at the Kreager Woodworking, Inc. He is the son of Sharon Stowe of London, England. She was a former Traffic Warden with the Metro Police in Central London and along with her is his stepdad Gary Stowe. Steven’s stepmother is Bonnie Goard and his late father Jeffrey Goard, a U.S. Army veteran. Steven also has a daughter, Stephanie Goard.

The couple met while playing an Xbox game three and a half years ago named “Destiny.”

Due to the COVID-19 pandemic, the wedding had limited guests. The couple will have a celebration soon with those who could not attend.

The Rev. and Mrs. Winston Yancey of Dillwyn celebrated 51 years of marriage by renewing their vows recently in the... read more