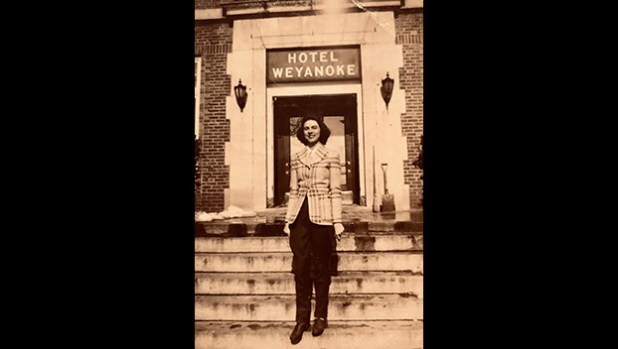 Melissa Garrett (Peters) in front of the Hotel Weyanoke in the 1940s. 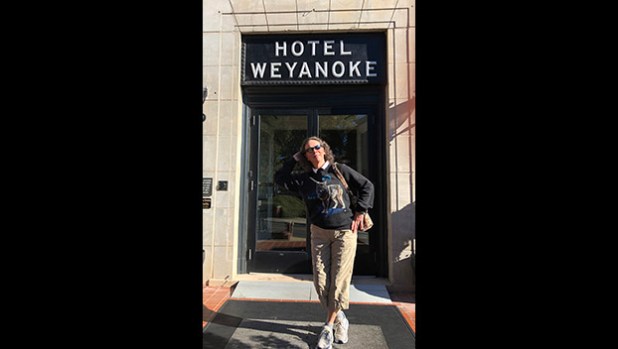 Katherine (Peters) Webster in front of the Hotel Weyanoke during a recent trip to Farmville.

During the fall, my husband and I (two old people and a dog) decided to do a marathon cross-country road trip from Littleton, Colorado to Farmville — my childhood hometown. Word was that the Weyanoke Hotel had been renovated, a mid-century modern classic, and was open for business and the fact that the hotel was “dog friendly” cinched the deal for us. We made reservations.

While relaxing and trying to pinpoint my childhood home on Georgia Street from the Catbird’s rooftop terrace with a 360-degree view, I remembered that my mother, Melissa Garrett (Peters) had told me stories of staying at the Hotel Weyanoke when she was young and single and working at the Garment Factory in Farmville in the 1940s. While taking a vacation picture of me in front of the Weyanoke, my husband said, “Don’t we have a picture at home of your mother in front of Hotel Weyanoke?”

Upon returning home, and after much searching old photos from my mother’s albums, I found her picture. She was standing in the exact same spot that I was, only 75 years apart!

There were many other discoveries during our visit to Farmville. I graduated from Longwood College which is now Longwood University. My father, Wayne L. Peters, was the manager of Harris-Cook Motor Company for 40 years, and now 127 North Street is the North Street Press Club. I could still see grease marks on the floor and imagine my dad at his front desk. The old rickety High Bridge is nothing like the old days where teenagers went to play. The upgraded High Bridge Trail is now part of a trail system and High Bridge State Park. Hiking there and enjoying the vista of brilliant fall colors was invigorating.

Farmville has come a long way. I am proud to say that Farmville is my hometown. I am amazed and delighted that 75 years later, I walked in my mother’s footsteps just outside of the Hotel Weyanoke! Thank you Hotel Weyanoke for the memories.