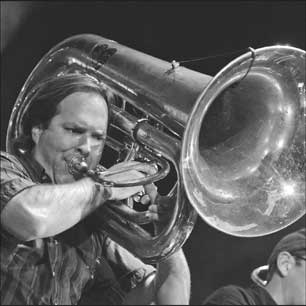 The 20th annual Longwood Honors Jazz Ensemble and the 24th annual Honors Concert Band performances will be held this Friday, January 9, at 7:30 p.m. in Jarman Auditorium on the Longwood University campus. Over 100 outstanding musicians representing nine area high schools will combine to form these ensembles under the direction of Longwood University Department of Music faculty members Dr. Charles Kinzer and Dr. Gordon Ring.

Featured soloist with both groups will be Stefan Demetriadis, a bass trombonist and tuba player who is very active in the Richmond area. He plays tuba and contrabass with the popular New Orleans style jazz band, the “No BS Brass Band,” and he teaches and coaches a number of high school marching band brass sections and students.

The Honors Jazz Ensemble will perform works by Stanley Turrentine, Wycliffe Jordan, Dizzy Gillespie, and the group Ides of March, including two works which will feature Stefan Demetriadis.

In addition to Rhapsody for Euphonium and Band featuring Demetriadis again, the Concert Band will also perform three new works. Conductor Gordon Ring’s High Street Fanfare will open the program, followed by Shillelagh! by Lynchburg composer James Meredith. Meredith retired in 2013 after 40 years as a middle school band director, and he will conduct his work.

The Concert Band will also give the world premiere performance of On a Cold Night, Looking at the Stars by Jonathan Wyatt. Jonathan is a senior at Randolph-Henry High School and he will be performing on trumpet in the ensemble.

Admission to the concert is free and the public is invited to hear these fine high school musicians.