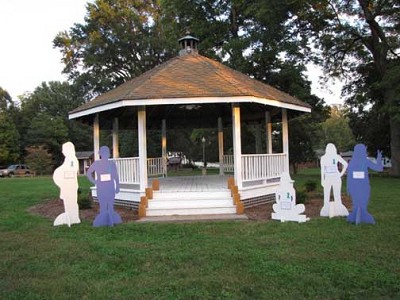 Every October, Domestic Violence Awareness month is observed to bring to light an issue that affects our community.

On Oct. 4, Southside Center for Violence Prevention, Inc. Madeline's House held a vigil to remember victims of domestic violence who lived in Southside Virginia. This vigil was held in Blackstone's Seay Park, and was led by the Rev. Dr. Stan Thompson of Crenshaw United Methodist Church as well as Madeline's House staff. Members of the community attended to remember lives lost and to support those who provide services to victims seeking safe haven.

Also present at this vigil were a number of Silent Witnesses. For a number of years, Madeline's House has placed these wooden witnesses throughout downtown Blackstone the week leading up to the vigil. In 2011, when the original wooden figures became difficult to obtain for display, students at Amelia High School agreed to make a set especially for Madeline's House as a domestic violence awareness project. These purple and white wooden figures represent fallen victims from Southside Virginia, each bearing details of his or her death.

During the many domestic violence awareness activities scheduled in October, Madeline's House has received many inquiries about the need to relocate Madeline's House when a major Department of State training facility is constructed. Relocation plans have been developed and are being initiated as resources and opportunities become available. With limited resources for providing services to victims of violence, the addition of meeting relocation costs is an added financial burden. The board continues to appeal to the communities served by Madeline's House for financial support.

For additional information on how to help assure there is no lapse of services during this time of relocation, call (434) 292-1077.

I went on a pilgrimage last week to the mountains. I often like going for what I call “rambles”, road... read more