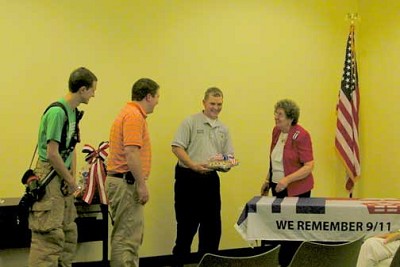 To its meeting on September 11, the Judith Randolph-Longwood Chapter/NSDAR invited firefighters from the Prince Edward Volunteer Fire Department. They represented firemen and fire departments everywhere. Chapter Regent Dr. Nancy Vick presented to the firemen a basket filled with surprises. Dr. Carolyn Wells presented the NSDAR Flag, “Remembering 9/11”. Featured on the flag were the Twin Towers, the Liberty Bell, and the Pentagon.

Some of the DAR members shared their memories of that day eleven years ago. Nancy Pempel was working in Garden City, New York, on Long Island. During her morning break she heard her co-workers talking about a plane flying into the Twin Towers. Her boss turned on the radio so everyone could hear. Since Nancy was in New York and many of the employees had family or friends working at the World Trade Center, her office closed. She spent the rest of the day at home glued to the TV comparing notes with her sister, Jenny, in Farmville.

Jenny Bobko was in the kitchen baking pies. She normally gets up, has a cup of coffee, and turns on the TV. That morning her sister, Nancy, from NY, called to say that a plane had hit the Twin Towers. Jenny called Nancy when the second plane hit the other tower. When the third plane went down in Western Pennsylvania they both became very concerned and anxious about their families who lived there. This was the saddest day of her life, Nancy thought, to see so many people lose their lives. After the terrorist attacks, though, she saw a lot of outpouring love that seemed to bring everyone closer together. People started showing greater patriotism for their country, the USA.

Dr. Barbara Smith was in Pinehurst, NC, getting ready to play golf, the Ladies Southside Team Finals. She said they turned on the TV to get the weather report for the day and much to their surprise and sorrow they saw two planes crash into the Twin Towers. Of course, they continued watching TV for some time in shock. The group of golfers decided to delay tee times for several hours. At that moment a round of golf, tournament or not, did not seem so important. The whole country scene was very sad. Yet, this sadness seemed to bring our country together. People were more patriotic.

Nancy Vick was working as a library media specialist in a middle school located between Cherry Point and Camp LeJeune Marine Bases in Cartert County, NC. Since the controls for school-wide TV were located in the library, she had to make sure everyone had access to a TV. The entire school was watching. Of special concern was the safety of the brother of the school secretary. He worked at the Twin Towers. When the school learned that he had been moved to another building everyone was relieved. As the day progressed shock, helplessness, and prayerfulness were seen everywhere. Speculation about what would happen next began. Feelings of patriotism and love for family and country were very strong.

Kay Whitfield told of a man who had been a friend to her, to her mother, and to all who knew him in the Farmville community. On September 11, 2001, Kenny Lewis was a flight attendant who lost his life as the plane crashed into the Pentagon. Kay, and all who knew him, will always remember Kenny's friendship and kindness towards everyone.

As Barbara Smith said, “It is never too late to thank our firemen, policemen, and those who work daily to protect our country.” The Judith Randolph- Longwood Chapter/NSDAR did that. The members remembered how important the firemen were in their actions of 9/11/2001 and recognized how important they, and all public service workers, are in protecting and saving lives.

VCU Massey Cancer Center is conducting a research study to improve the quality of life of cancer survivors in this... read more