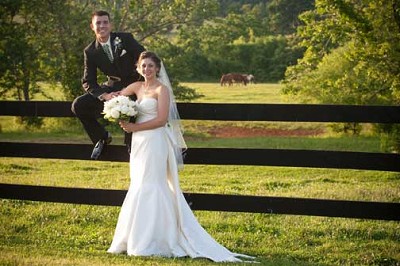 The marriage of Miss Sarah Brittany Dorrier to Mr. Richard Andrew Oliva III took place on May 19 at King Family Vineyards in Crozet.

The bride, escorted by her father and given in marriage by her parents, wore an ivory tissue taffeta trumpet bridal gown with a draped sweetheart bodice and chapel train, with a removable tissue taffeta gathered sash with sculpted bow, streamers, and ivory flowers at back.

Miss Lauren Everett, of Virginia Beach, served as maid of honor. Bridesmaids were Miss Caitlin Poole, of Fairfax; Miss Sara Yeatman and Miss Lindsay Staton, both of Charlottesville; cousin of the bride, Miss Christen Cruger, of Staatsburg, NY; and sister of the groom, Mrs. Heather Tompkins, of Charlottesville. Miss Amy England, cousin of the bride, served as flower girl.

Benjamin Beaudreau, of Park City, UT, served as best man. Groomsmen were Billy King, of Charlottesville; Phillip Teal, of Faber; Tyler McCauley and Jon Thomas, both of North Garden; and brother of the bride, Landon Dorrier, of Scottsville. Trevyn Deane, cousin of the groom, served as ring bearer.

A rehearsal dinner hosted by the parents of the groom was held at Mountfair Vineyards in Mountfair.

A reception with dinner and dancing hosted by the parents of the bride was held in the Carriage House of King Family Vineyards.

After a honeymoon trip to Jamaica, the couple now resides in North Garden.

The bride is a 2009 graduate of The University of Virginia, with a bachelor's degree in Psychology. She is currently employed by The Little Gym of Charlottesville.

The groom is a 2003 graduate of Monticello High School. He is currently employed by Ceramico Tile Company.

Way back in February we started making plans for a first week in June camping trip to Assateague Island National... read more