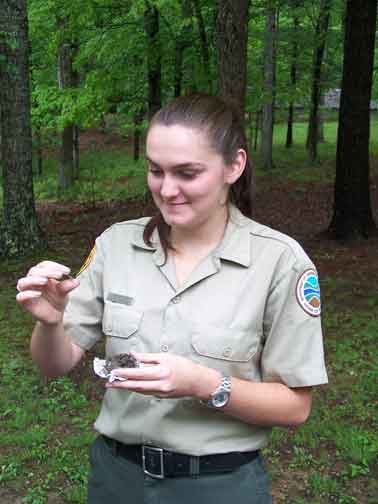 On the evening of May 12, High Bridge Trail hosted an evening walk to the bridge in an attempt to spot or at least listen to the Barred Owls that occupy the river bottom below. Approximately 25 people gathered at the River Road access lot for the evening fun led by special guest interpreter Carley York, of Twin Lakes State Park. After a brief discussion on owls and their special traits and habitat by Carley, the group all set off down the trail at dusk. The weather was perfect with some cloudiness making good contrast for owl watching.

Once on the bridge, the group quietly advanced to the first overlook where Carley used an electronic amplifier with the recorded sound of an Eastern Screech Owl to lure a response. We weren't there three minutes when a hootenanny broke out! It sounded like the trees were full of excited monkeys as the owls all responded to the strange sound as if inquiring “who are you?!”

When the excitement abated, a glimpse over the railing revealed the sight of quickly flying light colored streaks moving from tree to tree. A little while later the same audible outburst occurred again on the other side of the bridge as they all erupted into another frenzy of that “WHO COOKS, WHO COOKS FOR YOU?” call that is so distinctive among Barred Owls.

The group was on the bridge for a total of 30-40 minutes before returning to the parking lot for closing comments and reminders to be safe on the return trip home. It was an enjoyable evening of exercise and learning about a wonder of nature.

Downtown Film Series is pleased to open the 15th Anniversary Season of Stars Under the Stars with the 1959 romantic... read more