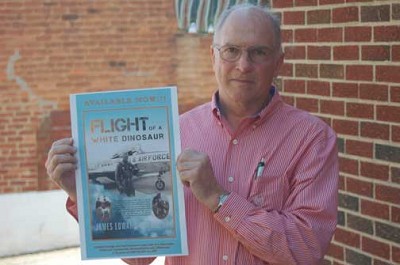 Author Shares Memoir With A Message

In Flight of a White Dinosaur, author James Edward Harris Jr. takes the reader on a journey to his past and offers insight on the views he developed along the way.

“I am grateful to the many conscientious, true blue Americans who inspired me to write this book,” the author wrote in the beginning of his book. “This is especially the Tea Party organized at the Chesterfield Diner in 2010. Had it not been for the group's spirited discussions, many of them over doubts as to how the nation, Commonwealth of Virginia, and local governments are run, I never would have picked up pen and paper.”

“It was a grass roots effort that started with a group of people you might see meeting in McDonalds, but we met at the Chesterfield Diner,” Harris remarked. “We had a discussion group. We talked about the Constitution and the way the country was headed. The diner closed, but the group stayed together. That's why I decided to write a book.”

The author's memoir is centered around an area he still considers home.”

“I wanted to relate back to my home area, which is the triangle of Hampden-Sydney, Worsham, and Kingsville,” he said.

The overall benefit of growing up in small communities and rural areas is that you had plenty of latitude to learn your way, and there was always an adult nearby to instruct you or to look out for you. These were simpler times . . . My memories while living in a rented, shotgun-type house (it was so small you could shoot a shotgun through it) behind the station involved friendly and supportive people during the Monday through Saturday operations . . . My father whom I (James “Jim” Edward Harris Jr.) was named after, was a pioneer, you might say, with the motoring world, emerging at the beginning of the twentieth century. He was the first Esso operator at the intersection and began there in 1926. For a number of years I thought living there was much like the Walton's well-known experience near Charlottesville. (Chapter 9)

Harris' idyllic childhood changed when his father died in 1955.

My father was a hard worker but certainly no saint. Maybe being the human landmark at Kingsville from 1926 to 1955 with his nose constantly to the grindstone wore him down over the years . . . When he died mom placed me in his chair at the kitchen table and said, 'You're in charge now.' Anne was going away to college in another year, so we wouldn't see her much after Dad died. (Chapter 9)

After Mr. Harris died, the author's uncle, Metellus (Tellus) Fitzpatrick, frequently took him hunting and on other outdoors adventures.

“When I first took my book to editor Charlie Finley in Richmond he noted that I had a strong outdoor background and referred me to Pat McManus, a humorist who wrote articles for Field & Stream,” Harris recalled. “After I read eight of his books sitting in a turkey blind last spring I decided to incorporate the outdoor humor I had learned over the years in my book. My book is very humorous in places. Humor is what helped me through a lot of situations.”

Harris' mother, Nell Fitzpatrick Harris, who had earned her teaching certificate from the Farmville State Teacher's College and a certificate from M. M. Layne Business School in Farmville, was a strong advocate of education.

“My mother came from a farm family, and my father was a mechanic,” Harris observed. “We were definitely blue collar people. My mother was pretty much all business – she had to be because my father died when I was 12. She made sure my sister Anne and I both went to college and stayed on task with academics.”

The author went to the University of Virginia for his BA in psychology and later earned an MPA from Virginia Commonwealth University in Richmond. After a tour in the Air Force, Harris worked as a reporter for The Farmville Herald for several years before embarking on a 20-year career with the criminal justice system in 1973. He also served 20 years with the Air Force on active duty and in the reserves.

“I've always been interested in child development,” Harris related. “I took psychology in college, so I had a chance to work in juvenile corrections.”

As his career in juvenile corrections evolved, the author noted that he became distressed by a “give me” mentality that he observed in a large part of the population. There are six chapters detailing the author's experiences in the field (often literally while chasing AWOL juveniles) of criminal justice.

“Kids in the criminal justice system are kind of a microcosm of what's happening in society,” the author stated. “I found that the government wasn't adjusting to what was happening.”

The author believes that the problems in the juvenile corrections system are not confined to local or state authorities.

“This book exposes practices that in no way come close to meeting Constitutional principles and organizational standards that are in writing but that our leaders do not adhere to,” the author wrote in a flyer promoting his book. “What I saw is not only impacting the taxpayer but is obviously making us a country based on favoritism, rather than competence and efficiency.”

“It seems like we've lost track of where we've come from and where we should be going in this country,” Harris stated. “I think there has to be a change of leadership at all levels. Leadership should be fair to all citizens. People think that preferential treatment and trying to level the playing field is part of the Constitution. It isn't.”

That sentiment is reflected in the book's title.

“I know the title may cause apprehension on the part of some people,” Harris noted. “The discussion group we had – mostly white males – said, 'we're nothing but dinosaurs anymore.' Now we have a book, and it reflects the thoughts of a lot of people who share these views. It's not my book – it's a group effort.”

The author believes in the return of basic values.

“Crime in Virginia and the nation is almost a constant and no one seems to know how to deal with it, because we have forgotten traditional values, such as keeping the family together, good parenting, and objective merit systems for achievement,” the flyer promoting White Dinosaur states.

“The beauty of America is that we always make adjustments,” the author concluded. “I think society will adjust. There are a lot of things to be concerned about, and the book covers them. If anybody reads my book I think they'll see what is happening and they'll see that I have some solutions.”

The author will hold a book signing in Graham Hall on the Hampden-Sydney campus on May 12 from 10 a.m. to noon. His book is also available online at these web sites: xlibris.com, amazon.com, barnesandnoble.com and at the Hampden-Sydney College Store and Longwood University Library. The author is available for book signing and presentations; his email contact is j_harris08@comcast.net.