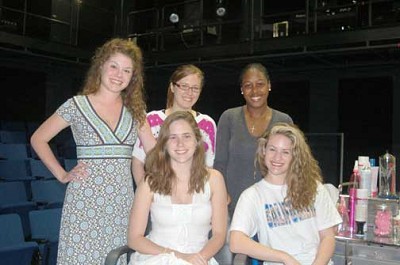 Steel Magnolias is a play that conveys a powerful message with gracious Southern charm. As the characters clearly impart, it is friendship – especially the special bond between women – that carries life's sorrows. Every Southern woman understands -magnolias may look fragile, but their stems are often made of steel.

“I really do believe that this is a story that can touch the women in our community,” stated Ronda Scarrow, director. “We live in a small town where there are so many groups of women who get together at church or at the Y or when their children play the same sports.”

With only six characters and one set, Steel Magnolias is a play free to focus on the interactions between the women who come and go at Truvy's Beauty Parlor. The friendships that evolve are also a familiar reflection of small town life.

“These friendships are so special and so meaningful – no matter what age,” Scarrow affirmed.

Scarrow, who previously taught at Fuqua School, has been at Longwood University since 2008. She is currently teaching four classes.

Steel Magnolias is her first experience in directing a Longwood play.

Steel Magnolias first opened Off-Broadway in 1987. Originally written as a short story by Robert Harling, it was the author's way of coping with the death of his younger sister who was diabetic. Harling incorporated humor and lighthearted conversation in his story because he realized it for what it was – friends helping friends through the most difficult of life's situations.

The Longwood students who portray the six women in Steel Magnolias – M'Lynn, Shelby, Clairee, Truvy, Annell, and Ouiser – see their roles as a challenge, albeit a familiar one.

All of them are from Virginia.

“Some of these students are from small towns or they came to Longwood because they wanted to be in a small town setting,” Scarrow related.

“For me there's something to be said about the strength of a Southern woman,” related Stephanie Trippeer, who portrays M'Lynn. “There's a lot to be said about putting a smile on your face and not talking until you are in that intimate setting where you can break down.”

Most rely on role models in their own lives to help shape their characters on stage.

“My mother is a female pastor,” said Maggie Williams (Truvy).

“My mother's not like anyone in the show – she's from Pennsylvania,” Adrianne Johnson (Shelby) commented. “But she is my best friend – that's just the relationship we have.”

Other actors rely on their own personalities.

“I'm lucky because I actually have a lot in common with Annelle,” related Kelsea Olszewski. “I'm a very quiet person. I observe and feel very awkward a lot. It's fun to take my personality and make it a lot bigger.”

“I don't know anyone like Clairee,” noted Katrina Epps.

Laughter shared by the cast, obviously friends as well, indicated that Epps had managed to make this role her own.

Scarrow regards all of the above factors as important in the teaching process.

“When I directed my first play in high school I came back to Longwood to tell Dr. Lockwood and Dr. Young that they had prepared me,” Scarrow related. “There's no doubt that at Longwood University we continue to do that. When these students are ready to leave they'll be ready to do what they were trained to do.”

Part of the training for this production was to take her cast to a small town “beauty parlor.”

“After we went to the local beauty shop I walked out of there thinking how perfect it was,” Scarrow said. “The cast saw characters in the shop who were exactly like the ones in the play.”

“We saw one lady who wore heels to the beauty shop,” Stephanie marveled. “The lady still wears heels!”

Through observing first-hand some of the quirks and habits of small town life, the beauty parlor experience strengthened the cast's focus on what they hoped to portray on stage.

“There are two things that I hope both the cast and the audience will walk away with,” Scarrow told her cast. “One – friendships are very special, and two – life is precious. We should be grateful for every moment, but even when life is snatched away, isn't it nice to have someone to hold your hand?”

As one, the cast nodded. These steel magnolias are obviously ready to steal the show.

Steel Magnolias will be performed on April 12-15 and 19-22 in Longwood University's Mainstage Theatre in the Center for Communication Studies and Theatre. Show times are 7 p.m. Thursday-Saturday and 3 p.m. Sunday. Tickets are $5 for Longwood students; $6 for Longwood faculty/staff, senior citizens and students from other schools; and $8 for general admission. Box Office hours are Wednesday-Friday noon-5 p.m. and one hour prior to shows.

Earth Day at Sailor's Creek Historical State Park will be observed Saturday, April 21 with a two-part program. In the... read more