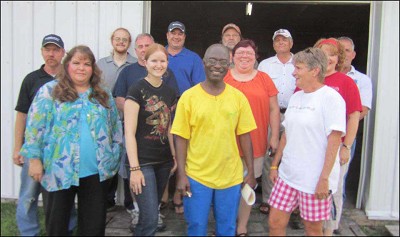 Eight years ago Farmville physician Dr. Kwabena Donkor started on the “Road to Africa,” a project to build a medical clinic in Ghana, Africa, that would serve villages that currently have no health care. This year, the local doctor's holiday wish includes the people of Farmville who have supported his clinic in so many ways.

“One of the things I really want to do is to take a picture of the first patient we see at the Ama Nyame Memorial Medical Clinic and bring it back to Farmville,” Dr. Donkor said.

This holiday season Dr. Donkor will be on the road himself, heading for Ghana.

Like Santa, Dr. Donkor will be bringing gifts for the people of Ghana, including a 40-foot container of medical and building supplies for the clinic – not to mention a team of helpers.

No, they are not elves.

A 19-member interdenominational mission team headed by Clinton Dalton will leave Jan. 1 to assist Dr. Donkor on this trip. Their goal is to build a maternity wing for the clinic during their two-week stay in Ghana.

“Our teams have gone all over the world,” Dalton explained. “We have gone to Chili, Dominican Republic, Haiti, Russia, Mexico, and Africa.”

“My wife met Dr. Donkor and said – why can't we help him?” Dalton added. “I asked the pastor, and he said yes.”

Dalton, who attends New Life Assembly of God in Farmville traveled to Africa in 2008.

“People there were laying on the ground waiting for the doctor for three days,” he related. “The doctor would travel around, and the people who were sick had to wait for him. That's one of the reasons we wanted to help Dr. Donkor with this.”

The Ama Nyame Clinic in Ghana is 50 miles from a hospital.

“People here think 50 miles is not far,” Dalton continued. “In Africa people don't have a car. They have to walk for three days sick to get to a hospital. People just don't realize – 50 miles is a long way in Africa.”

Heading the medical staff at ANMMC, or Ama Nyame Memorial Medical Clinic, is Dr. LaDonna Regier who gave up her medical practice in Colby, Kansas, to come to Africa. Dr. Donkor met her in 2006 when he was speaking to a Rotary Club about his project.

Dr. Regier recently passed her board exam in Ghana and is now licensed to practice medicine there. While waiting for the Minister of Health to give ANMMC a license to operate, Dr. Regier is working at a local hospital.

“She is working for free, and she loves it,” Dr. Donkor said. “She's learned a lot there. She told me she would have been lost if she hadn't done that.”

“We'll have two doctors and two nurses while we're there,” Dalton related. “We'll be helping people with medical needs.”

Other team members will be visiting local villages.

“We have some ladies who will go out and visit,” he added. “They have a projector and will be showing some Bible stories like Veggie Tales.”

The Gideons have also donated Bibles for the team to distribute.

“I'm in the Gideons,” Dalton explained. “The people in Africa also use Bibles to teach English – they use them for many things. The schools don't have a lot of books.”

Donkor appreciates all that the people of Farmville and surrounding communities have done in donating money and supplies over the years. Many of these donated items are already in place at the clinic in Ghana.

A major donation in Dr. Donkor's eyes was an ambulance that was purchased and given by a local resident this year.

“An ambulance is very important to me,” Dr. Donkor stated in an earlier feature in The Farmville Herald. “I've seen terrible maternal deaths because of the distance the mother has to travel to the hospital.”

“If we can get an ambulance it will really make my year,” he added in the April 2011 feature.

Now that ambulance is in place at the clinic, ready to travel from village to village.

“Just having the ambulance there creates a different aura,” Donkor said. “The people know there's something in that ambulance that will take care of them.”

Other significant donations came in recently after an appearance on local radio station WFLO.

“People donated a generator, a cement mixer, a projector, and all kinds of construction equipment and materials I asked for,” Dalton noted. “In one day it was given to us.”

Dr. Donkor and the mission team are hoping more donations will come in over the holiday season.

“The building we're going to put up for the maternity clinic will cost about $19,000,” Dalton advised.

“If people send donations through the church, we can give them a tax write-off for them,” Dalton added.

“Right now the main thing we need is money to finish the building,” Donkor concluded.

Great or small, every donation comes with a guarantee: this gift will keep on giving.

A fundraiser Brunswick stew to raise funds for the upcoming mission trip to Ghana that will leave January 1 will be held this Saturday, Dec. 3, available at noon, at New Life Assembly of God in Farmville. Donations (tax deductible) may be mailed to New Life Assembly of God, 9 Mahan Rd., Farmville, VA 23901 with “Dr. Donkor's Clinic” in the memo line.