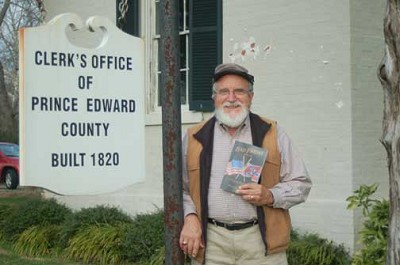 As a Presbyterian minister for the past 50 years, the Rev. William Thompson knows more about Good Friday than most. His recently published book on the final days of the Civil War in Prince Edward County precedes the Good Friday of 1865 by one week. It was the day of Lee's Retreat through Farmville and Prince Edward County, April 7, 1865 – long remembered by those who lived it as “Bad Friday.”

“I am pleased to offer this account of some of the unknown (but now documented) events that took place in this triangular area of the three little communities of Kingsville and Prince Edward Court House and The Hill community of Hampden-Sydney College,” the author wrote in the preface of Bad Friday: April 7, 1865.

Rev. Thompson, who was an honor graduate of Davidson College and holds three graduate degrees from Union Theological Seminary as well as an honorary Doctor of Divinity degree from Hampden-Sydney College, came to Hampden-Sydney in 1988. He served as pastor of the College Presbyterian Church from 1988 to 2002.

“When I came to Hampden-Sydney I started collecting memoirs from yearbooks – the college yearbooks started in the 1890s,” he explained. “There were still people living at that time who had experienced the occupation.”

In 1996 Rev. Thompson gave a presentation at a H-SC Summer Alumni College on the Civil War. One of the other presenters was Chris Calkins, former chief of interpretation for Petersburg National Battlefield and currently park manager at Sailor's Creek Battlefield State Park.

“Chris came up to me afterwards and said he would like to help me put some of this local history together,” Thompson recalled.

Rev. Thompson began assembling information from his own library as well as the Hampden-Sydney Library and Museum, the Virginia Historical Society, and the Research Library at Sailor's Creek.

“It's really been about 15 years,” the author noted. “With the development of the Rails-to-Trails at High Bridge and the opening of the Sailor's Creek Visitor's Center, I felt the time was right.”

Thompson's book focuses on the events that took place to the south of Farmville.

Thompson explained that Lees' intention was to reach the Richmond/Danville Railroad.

“Lee could get the fortifications he needed at Danville and also would be supplied by the railroad,” the author said. “When the Union Army cut him off at Jetersville and Burkeville he had to come across what is now essentially Route 307.”

This, of course, brought the war to Farmville.

“After the battle at Sailor's Creek, Grant and Sheridan exchanged courier messages,” Thompson related. “That night Sheridan ordered 2,200 cavalrymen to come across to Burkeville and invade Worsham, then Prince Edward Court House. The next morning Sheridan came with about 8,000 cavalrymen. They arrived about 3 p.m. Then 12,000 infantry of the V Corp came down what is now Route 15. They didn't arrive until 7 'o' clock.”

In total, 20,000 Union troops converged on the rural communities to the south of Farmville as Lee made his retreat toward Appomattox. The logistics of routing so many men through a largely rural area was staggering – even by modern standards.

“They stole all the fence posts and fence railing to make fires for cooking,” the author related. “One artilleryman wrote that he didn't settle down until 11:30 that night. It took over four hours with that many men.”

When the Union troops headed toward Prospect Depot the next day they were confronted with another modern day annoyance – the traffic jam.

“The combined cavalry forces that were now under Sheridan's command all converged about noon on the totally-jammed Lynchburg Road at Prospect Depot, and it took a long time to sort out their correct sequence and their properly apportioned routes.”

Contributing to the congestion were creeks along the route that were swollen with springtime rains. At Buffalo Creek, Gen. Chamberlain was forced to shed both his horse and his clothes during the crossing.

“Presumably Chamberlain had to strip and then re-clothe himself in some fashion, but since his supply wagon was probably not nearby, he perhaps had to borrow some ill-fitting clothes from members of his staff or perhaps these colleagues had to splash as much semi-clean water as possible over the naked general and his horse. In any rate, it was not a very dignified scene, which various passers-by may have enjoyed to Chamberlain's discomfort.”

As uncomfortable as these conditions were for the pursuers, they were even worse for the pursued – as well as the innocent bystanders along the path of both armies.

“Meanwhile, how were those Prince Edward County communities dealing with the aftermath of their previous day's cavalry and infantry occupations? Throughout the remainder of the weekend Confederate soldiers who had fled from the debacles of the Sailor's Creek battles on Thursday came out in public and were given further succor as they continued their respective treks back to their homes in the deeper South.

Charles Dabney recorded the following recollection: “First came the poor hungry survivors of the Confederate Army. They went through the house, garden, barn and corncrib, taking everything they could eat. They caught every pig and chicken that they could, leaving us only our cows, and (they) even cut off the stalks of cabbage standing in the garden. The poor fellows were decent to mother and took nothing from the house without her permission.”

“I found references to survivors of this talking about this being “Bad Friday,” the worst Friday they ever had,” Rev. Thompson noted.

“I like to think it was on the way to being a good Friday,” the retired minister concluded. “It was bad as it could be, but peace came within two days, and a whole race of six million people were set free. So it was ultimately a good Friday.”

Bad Friday: April 7, 1965 is available at the Farmville Visitor's Center, the Longwood University and Hampden-Sydney College Book Stores, and the Sailor's Creek Visitor's Center or from the author.