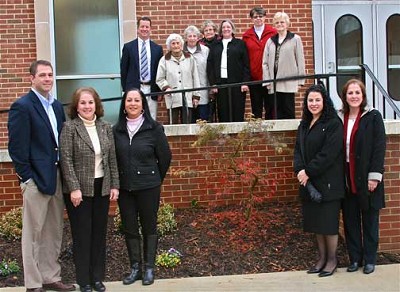 Dr. Maria C. Milian-Silveira, a retired and beloved Longwood University Spanish professor who died in April 2011, has been honored by the Ruth Adams Garden Club, of which she was a charter member and past president.

The garden club donated a Japanese maple tree that was planted recently in front of the entrance to Wygal Hall on the Longwood campus. Six members of the garden club and Dr. Silveira's four daughters, three of whom are Longwood graduates, and a grandson visited campus Nov. 17 to view the tree. They were officially welcomed to campus by Dr. Charles Ross, dean of the Cook-Cole College of Arts and Sciences.

“Everything about this day is serendipitous,” Mireya Hayes of Richmond, one of the daughters, said that morning in the Wygal lobby. “First, the Japanese maple was one of my mom's favorite trees. Second, this is my dad's birthday. Third, Wygal houses the music department, and my mom loved music. In fact, that song that's being played right now in the auditorium, by Chopin, was my mom's favorite song. So, it's appropriate that the tree is right here by the music building.”

Mireya is a 1974 Longwood graduate, as is her twin sister, Maria Harris, also of Richmond. Another sister, Virginia “Ginny” Gills, of Cartersville, assistant principal of Cumberland County Elementary School, received a bachelor's degree from Longwood in 1989 and a master's degree from Longwood in 2005. Their sister, Rosa Mann of Farmville, and a grandson of Dr. Silveira, Grant C. Hayes II, also visited campus Nov. 17.

Among the members of the Garden Club who came to campus that day were Dr. Nancy Andrews, a retired Longwood faculty member; the current president, Carol Fields, who didn't know Dr. Silveira; and past president Nan Colvin, who did know her.

“I thought this was a good way to honor her memory,” Colvin said. “She was just so great to everyone she met. She had that ability to make everyone she met feel special. She had such a vibrant personality, and everyone loved her. She loved Longwood and she loved trees, and the Japanese maple was one of her favorite trees, so this was just an appropriate thing to do.”

Dr. Silveira, professor emerita of modern languages, taught at Longwood from 1964 until retiring in 1992, after which she taught as an adjunct. A native of Cuba who emigrated to the United States in 1962, she initiated Longwood's partnership program with the University of the Andes in Venezuela, directed the study-abroad program at the University of Madrid and the Summer Spanish Institutes for teachers, founded Longwood's chapter of the national Spanish honor society, Sigma Delta Pi, and was president of the Virginia chapter of the American Association of Teachers of Spanish and Portugese for five years. A scholarship in her name, the Maria Milian Silveira Scholarship, was established in 2005, endowed by a generous gift from Michael Hackett, a 1985 graduate.

“I owe a lot to Dr. Silveira, and I hope that one day I may influence others the way that she has influenced me,” Hackett once wrote in a letter nominating her for the National Teacher of the Year award from the American Council on the Teaching of Foreign Languages. “Dr. Silveira is unquestionably the most dedicated, devoted, exciting, and inspiring person whom I have ever met.”

Dr. Silveira's husband, Michael A. Silveira Jr., also a native Cuban, was Longwood's director of audiovisual and technical services for many years. He retired in 1991 and died in July 2009.

“When I think of my mother, I feel admiration,” Virginia Gills said. “How one person could accomplish so much, inspire so many, and leave such a legacy of excellence is amazing.”