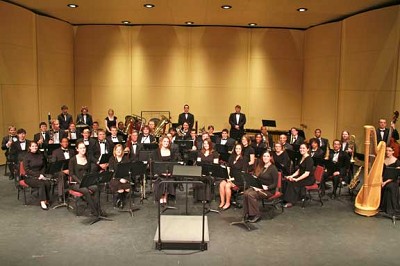 A concert featuring three of Longwood University's student ensembles will be part of the inauguration of President Patrick Finnegan.

The “Silver Notes Celebration Concert,” which is free and open to anyone, will be presented Thursday, Oct. 20, at 7:30 p.m. in Jarman Auditorium. The only inaugural event open to the public, the concert will feature performances by the Camerata Singers, Jazz Ensemble A, and the Wind Symphony.

Among the eclectic selections are tunes by the Beatles, John Philip Sousa and the contemporary hip hop group Black Eyed Peas, as well as “America, the Beautiful,” “When Irish Eyes Are Smiling,” and a work written by a Longwood alumnus about the 2001 fire that destroyed the original Ruffner Hall. The concert will end with a rendition of the “Longwood Alma Mater” to be performed by everyone, including the audience.

The Camerata Singers, the university's flagship choral ensemble, will open the concert. Two faculty members in the music department, Dr. Christopher Swanson, a tenor, and Dr. Jennifer Capaldo, a mezzo-soprano, will be featured as soloists. The 28-voice choir is conducted by Dr. Pamela McDermott, visiting assistant professor of music.

The program by the 18-piece Jazz Ensemble A will feature a number of student soloists including vocalist, Octavia Moton, a senior sociology major, who will perform “The Best Is Yet To Come,” a Frank Sinatra favorite. There will be a number of instrumental soloists including Holly Phelps (saxophone), a senior music major, and Greg Robey (trombone), a junior music major. “The jazz band's program will open with a quick military salute in honor of President Finnegan's Army background,” Kinzer said.

During the performance by the Wind Symphony, Christopher Swanson will be the vocal soloist on a set of Irish folk songs ending with the sentimental favorite “Danny Boy.” This will honor Finnegan's Irish ancestry. There also will be a piece, “Colonnade,” written in 2002 by Rob Blankenship, a 2000 Longwood graduate who majored in music and now is band director at Douglas Freeman High School in Richmond. “The composition was inspired by the Great Fire of 2001 and the recovery,” said Dr. Gordon Ring, professor of music, who conducts the 60-member Wind Symphony.

97th Birthday Celebrated – Across The Country