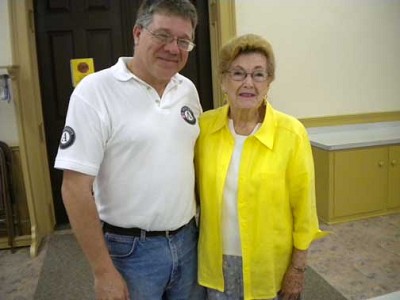 Flippen displayed his large collection of photos and documents of High Bridge history. A copy of the handwritten agreement, by Francis Carr and Christian Ehrman, to build the first High Bridge in 1851 was included in the collection. High Bridge, spanning the Appomattox River and its valley was completed in 1853 and the original superstructure lasted for eleven years. Twenty brick piers supported the bridge.

The South Side Rail Road opened the 132-mile rail line between Lynchburg and Petersburg and November 2, 1854.

High Bridge played an important role in the warning days of the Civil War. It proved to be an important military objective for both the Confederate and the Federal Union armies. On April 6, 1865, nine hundred Union soldiers attempting to burn the 2,500 foot-long 126 foot-high structures were captured by Conferate Cavalry. Crossing on April 7, retreating Confederates burned four spans of the bridge but failed to destroy the lower wagon bridge thus allowing Union soldiers to cross the attack at Cumberland Church north of Farmville.

Flippen exhibited a copy in one of his folders of an original color lithograph of the first High Bridge by the German artist, Edward Beyer, in 1857.

The second High Bridge was completed June 22, 1914. The total length of the steel superstructure is 2418 feet, approximately the same length of the first bridge.

It was a monumental undertaking to even begin the steel bridge, taking eleven months of preparation. Mules and scoops were used in earth removal to build the abutments. The best engineering minds of that day and time were secured to complete this bridge of 43 spans.

Flippen is the procurer of a rare find of 70-75 4×5″ glass negatives of the viaduct under construction in 1913 and 1914. Willis Wilson Vail was chief resident engineer of the project (b. 2-14-1868; d. 8-4-1951) and an excellent photographer of the progress of the construction of High Bridge who documented the revealing drama of this marvel of steel in a remote countryside over the Appomattox River Valley.

Flippen obtained these glass negatives on E Bay. One of particular interest is “The Titanic” a sand dredging steamboat that dredged sand from the river to make concrete masonry for the project. Forty-three steel spans were preassembled to the construction side.

Flippen will donate the glass negative plates and photos to the High Bridge Visitors Center. He presented a power point program on Sept. 20 at the Farmville Train Station at 7 p.m.