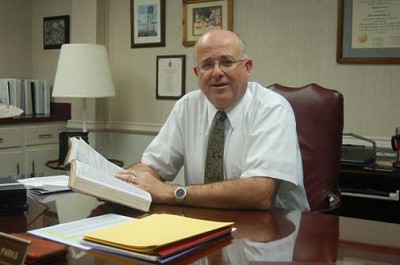 From the beginning of his ministry 33 years ago, the Rev. Robert Parks, new United Methodist superintendent for the Farmville District, has been on a journey – literally along the same road.

“I've stayed my whole ministry on Route 460,” the recently appointed superintendent said. “I've been a Methodist all my life – I was born and raised a Methodist.”

Over the past three decades Rev. Park's ministry has indeed followed the course of Virginia's main east-west corridor along U.S. Route 460, starting in 1983 at Mt. Pleasant UMC in Amherst.

“I went to LaCrosse UMC for five years, then the Sussex Charge, and Main Street UMC in Suffolk for ten years,” Parks noted.

“Most of these churches are smaller churches,” he added. “Our largest church is Farmville Church; our smallest has less than ten members.”

Rev. Parks is excited about the possibilities small churches have to offer.

“It's exciting to see a small church have a growth spurt – to get that recycled life,” he noted.

His primary goal, he explained, is to increase church membership.

“My number one goal is to increase professions of faith,” he affirmed.

Rev. Parks is disturbed by what he sees as an “ownership mentality” in established churches.

“That mentality is, people know the church has been here x number of years, so they don't have to go out and invite those not in the church,” he explained. “I think we need a 'sojourner's mentality.' We're just travelers, and it's our responsibility to not just be the people of God, but to invite others to be the people of God.”

Rev. Parks also believes his role is to lead.

“I think it's very important for the church to have spiritually healthy pastors,” he said. “I believe one of my responsibilities is to teach and lead that spiritual foundation.”

He looks at the superintendent's office as an extension of the bishop's office.

It is a journey, like Park's own ministerial travels along U.S. Rt. 460, that tends to come full circle.

“It's like when you drop a pebble in a pond – it radiates out in waves,” Rev. Parks noted.

Making waves, in fact, is part of his message.

“When I drive these rural roads I see there are many needs,” he related. “People are hurting. I think we have a church in every zip code, so we can be that presence of Christ.”

Residents since June, Rev. Parks, wife Susan, and dog Sparky, are enjoying the small town feeling of Farmville. A daughter, Emily, is currently a student at Tidewater Community College, and son Trey is waiting to go into the Air Force.

“I've been very impressed at how the Farmville Church and the community has welcomed us,” he smiled.

Rev. Parks would like to channel the welcoming atmosphere he has found in Farmville. He hopes to inspire his churches to “leave the comfort of their four walls” and find ways to bring others inside.

“I'm a firm believer that God has given us the resources we need,” Rev. Parks observed. “I don't believe that God is going to put them on a silver platter and hand them to us. In this economic crisis it's time for the church to reach out and be disciples of Christ. That means we have to go into the community and offer Christ. It's not easy – but it's not impossible.”

“In Jeremiah, for example, times were bad. The people were being held captive in a foreign land,” he explained. “Today we're held captive by high unemployment, health care costs, and gridlock. We're in exile. In spite of that, we still have that future with hope as long as God is on our side. We need to share that message.”

Rev. Parks sees the small churches in his district as the perfect vehicle for spreading that message.

“When Bishop Cameron asked me to join her cabinet and offered me the Farmville District my first response was to thank her for sending me back home,” Rev. Parks concluded. “This is where my heart has always been – in the small churches.”