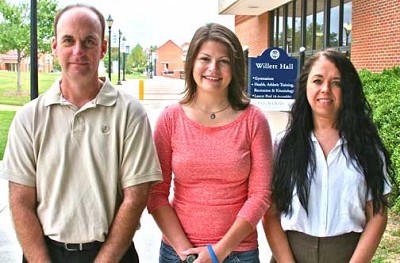 A local bowling program for youths with disabilities is being launched by a Longwood University faculty member and two of his students, one of whom is from Farmville.

The program, which is free, is an outgrowth of the Challenger Division of Little League Baseball Inc. that was started in May 2009 by Dr. Matt Lucas, assistant professor in the Department of Health, Athletic Training, Recreation and Kinesiology (HARK), among others. Organizers of the bowling program include Lucas, a specialist in adapted physical education; Brittany Long, a senior health and physical education major who is the league coordinator for the Challenger baseball program; and Tammy Young, a non-traditional student from Farmville.

The bowling will take place in the bowling alley in Longwood's Lankford Hall on six consecutive Saturday mornings (beginning at 9 a.m.) from Sept. 24 through Nov. 19.

“Parents in Challenger baseball would tell Brittany and me 'Hey, this is great, but it's only six weeks out of the year,'” Lucas said. “Those parents say they like their kids having something to do, and also like seeing other parents of kids with disabilities, so the bowling will provide additional opportunities. Most of our baseball players will participate in this, as well as others. Like in Challenger baseball, most of the participants will be in elementary or middle school. We expect about 15 to 17 kids to participate.

“The bowling will be individualized and modified for every child, like with Challenger baseball, and we'll have some different aids to help the kids bowl, such as ramps and a ball with a retractable handle,” Lucas added. “Like the baseball, it won't be competitive. It will be more about skill-building. We plan to use Longwood volunteers to buddy up with the kids, one Longwood student for each bowler. We're grateful that the Longwood Student Union is letting us use the bowling facilities at no charge.”

Anyone interested in the bowling program is urged to email Lucas (lucasmd@longwood.edu) or Long (brittany.long@live.longwood.edu).

Tammy Young is a senior pursuing a master's degree in special education and plans to graduate in spring 2013. She transferred to Longwood in fall 2010 after earning an Associate of Arts and Sciences degree from John Tyler Community College in Midlothian.

An average of about 10 kids participate in Challenger baseball, which is played in May and June on the softball field at Cumberland High School (this year the last game was played on the Longwood softball field). “We play a modified game within the group,” said Lucas, a 1994 Longwood graduate. “Everybody bats, and everybody plays the field. For the first 25 minutes, we do drills in which we work on skill development, then we move to a traditional game-like atmosphere. Two of our baseball players are in middle school, and the rest are in elementary school.”

Long, from Mechanicsville, has coordinated Challenger baseball the past two years. She is a member of Phi Epsilon Kappa, a national professional fraternity in health and physical education, and served for three years as president of PHETE First, an organization for students in the Physical & Health Education Teacher Education program, in which Lucas teaches. She has assisted with therapeutic horseback riding lessons with an organization in Rice called Heartland Horse Heroes; she teaches an adapted aquatics class and a family obesity class (Activate Southside) at the Farmville YMCA; and for three years, in conjunction with HARK, she has co-coordinated a wellness night for elementary and middle school students in the Prince Edward County schools. She plans to attend graduate school, then teach on the middle school level.

“Brittany is a top-notch student,” Lucas said. “She has the best work ethic of any student I have ever met.”

Before coming to Longwood, Lucas was involved with Challenger baseball in Northern Virginia for eight years during the 10 years he spent as an adapted PE teacher in the Fairfax County schools. The Challenger program was established in 1989 as a separate division of Little League.

In addition to baseball and now bowling, Longwood's HARK is involved in a collaborative therapeutic aquatics program in which it is working with the Cumberland County schools teaching children in the pre-school and elementary special education classes. This initiative is related to a course; the baseball and bowling are not related to a course.