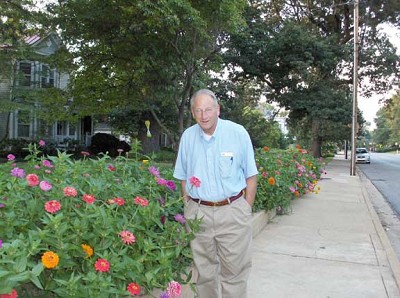 If you travel down High Street in Farmville during the summer you have most likely noticed the stunning display of zinnias in front of one of the homes. On July 26 the Redbud Garden Club traveled to visit the home of Baxter Carter and find out how he grows his gorgeous zinnias.

Baxter begins his next year's display at the end of this year. In the fall, after the plants are spent, he pulls them up, removes them, and tills the area. He plants grass so the area will not be bare for the rest of the fall and winter months. As soon as the seed catalogs arrive, he orders his zinnia seed. Baxter recommends buying quality seed from a reputable supplier. He purchases his seed from Park Seed and buys a cutting mix.

In the spring, he tills the grass under. He then applies lime and 10-10-10 fertilizer and tills again to work these into the soil. After the soil has warmed, he plants his seeds in the soil, marking each one with a toothpick. This way, as the seedlings emerge, he can tell which seedlings are zinnias and which are weeds.

He pays careful attention to weeding and watering as the plants develop. If he notices insect damage on the zinnia leaves he uses liquid Sevin and keeps a fungicide on hand should he need it. Periodically he dead-heads the zinnias or cuts them to give to friends. By doing this, more blooms emerge. He waters, fertilizes, and weeds as needed to continue the display well into fall.