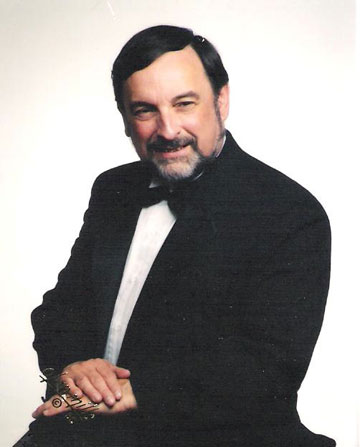 Dr. Paul S. Hesselink will present the Edith Elliotte Organ Recital on Saturday, August 13, at 4 p.m. at the Farmville Presbyterian Church. The program, presented in memory of Longwood music colleague Frieda Myers who died recently, marks the beginning of a church homecoming celebration. Ms. Myers served on numerous occasions as a substitute organist at the church and also played in the church's handbell ensemble.

He served for 12 years as director of music at the Farmville Presbyterian Church, being in that position when the Beckerath organ was installed in 1968.

For 26 years, Dr. Hesselink was on the music faculty of Longwood University. He taught courses in church music, music theory, music history and appreciation, organ and harpsichord, and was the department chair his last four years. He has published articles on the life and works of Arnold Schoenberg.

Taking early retirement from teaching and administration at Longwood, Dr. Hesselink moved to Las Vegas to affiliate with Nevada School of the Arts. He served as its dean for 12 years. He is an accomplished harpsichordist and in 1996 recorded the Concerto for Harpsichord and Chamber Orchestra with the Nevada Chamber Orchestra in Las Vegas. The following June he recorded the work with members of the Slovak Radio Orchestra in Bratislava, Slovakia; the recording was released on a CD on the MCC label, The Works of Nevett Bartow.

Dr. Hesselink has been an adjunct music faculty member at University of Nevada, Las Vegas since 1993. He played a major role in the securing of the Maureen Jackson Smith Memorial Organ at UNLV in Doc Rando Hall, completed in 2004 by the Rudolf von Beckerath Orgelbau of Hamburg, Germany. The organ is the largest tracker pipe organ in Nevada.

Dr. Hesselink, as dean emeritus, serves on the Board of Trustees of Nevada School of the Arts, and also is a member of the board of the Friends of the Las Vegas Youth Orchestras. Since January of 2010 he has been the organist at Christ Church Episcopal of Las Vegas where he presides over a new four-manual pipe organ of 54 ranks, designed and built by the Schantz Organ Company of Orrville, Ohio.

The Organ at Farmville Presbyterian Church. The tracker organ was hand-crafted for the church in 1968 by the firm of Rudolph von Beckerath of Hamburg, Germany, and is one of about 25 instruments built by the firm in North America. The organ consists of 16 stops, and 1,080 pipes arranged in 21 ranks. The Virginia firm of Taylor and Boody refurbished the organ in 2006.