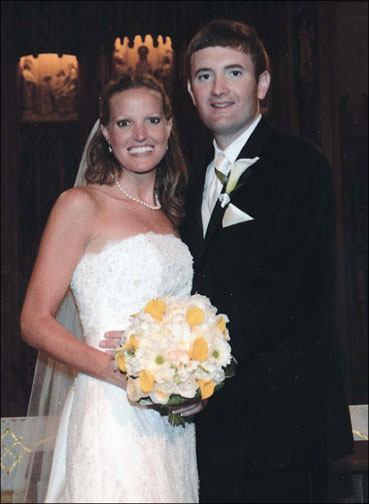 Duke University in Durham, NC, was the setting of the June 18 wedding of Miss Rebecca Ann George, daughter of Dr. and Mrs. Theodore George, of Potomac, MD, to Mr. Kemper Beasley, III, son of Mr. and Mrs. Kemper Beasley Jr. of Buckingham.

The Reverends Ryan Moore, brother-in-law of the bride, and Rick Caldwell officiated.

Matron of honor was Mrs. Heather Moore, sister of the bride, of Tulsa, OK. Bridesmaids were Mrs. Katherine Garnett, sister of the groom, of Orange; Mrs. Lauren George, sister-in-law of the bride, of Austin, TX; and Taylor University friends Miss Kristel Bailen, of Omaha, NE; Mrs. Abigail Fennig, of Clearwater, FL; and Mrs. Megan Kraftson, of Munice, IN.

Readers were Miss Marisa Gratson, of Indianapolis, IN, and John Case, of Scottsville.

After a honeymoon in England and Ireland, the couple resides in Buckingham.

The bride received a Bachelor of Arts degree in 2004 from Taylor University in Indiana and a Master of Education degree from McDaniel College. She is currently employed as a teacher in the Cumberland County Public Schools.

The groom received a Bachelor of Arts degree from Hampden-Sydney College in 2002, a Master of Theological Studies from Duke University, and is a third year law student at Liberty University.