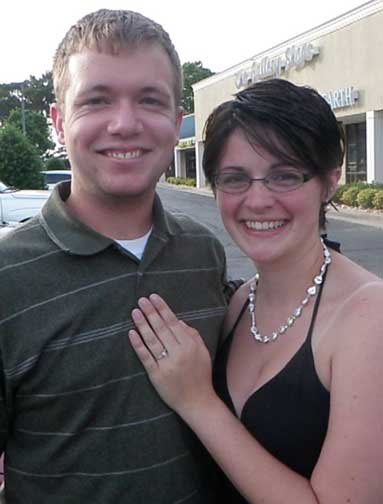 Katie is a 2004 graduate of Prince Edward County High School and a 2008 graduate of Longwood University. She is currently employed as a program specialist at the Jamestown Virginia 4-H Educational Center, and is an active artist. Katie is the granddaughter of Dr. and Mrs. Edward Bratcher, of Durham, NC, the late Mr. and Mrs. Charles Campbell, of Charlottesville, and Mrs. Ruth Ferguson of Farmville.

Jason is a 2006 graduate of Huntley Project High School in Worden, MT, and attended Montana State University in Billings, MT. He is serving as an Airman 1st Class active duty Air Force stationed at Langley Air Force Base in Hampton as a Tactical Aircraft Crew Chief and works on the F-22 Raptor. Jason is the grandson of Mr. and Mrs. Lee Rhine, of American Falls, ID, and Mr. and Mrs. James Hayes, of Ballantine, MT.

An August 28 wedding in Farmville is planned.