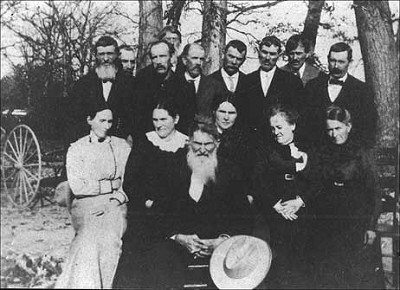 While Allen Reunions have been held consecutively for the past 67 years, the first Allen Reunion actually took place in 1912. Organized by John Sims Allen, of Crocker, Missouri, this reunion was held at “Woodland,” home of Mollie Allen and Nathan Bell.

The 14 children of Joseph Watson and Letitia McDearmon Allen helped their Uncle John with this reunion, and there was a large and sociable crowd attending.

No records were kept of reunions until in the 1930's when Miss “Polly” Marie Allen began keeping notes on each year's event. With the exception of the war years in the 1940's, 67 reunions have been held with records kept for each year.

In the 1980's family genealogists researched and opened up the reunions to the descendants of James Anderson Allen Jr. and his brothers Charles, Richard, Benjamin and Daniel. These Allen's settled in Cumberland and Prince Edward Counties in the mid 1700's and have many descendants.

Early reunions were traditionally held in Presbyterian Churches in the area such as Douglas, Lane's Chapel, and Davis Memorial. Even though in recent years other venues have been tried, the church setting has been the one most family members prefer. This year's reunion will be held on Sunday, August 7, at College Presbyterian Church, Hampden-Sydney.

Those wishing to attend the worship service at 11 a.m. and worship with the congregation may do so. The Allen gathering and lunch will follow in Thompson Hall at approximately 12:15 p.m. All Allen relatives are encouraged to come and renew their bonds of kinship. Bring picnic baskets and dishes to share.