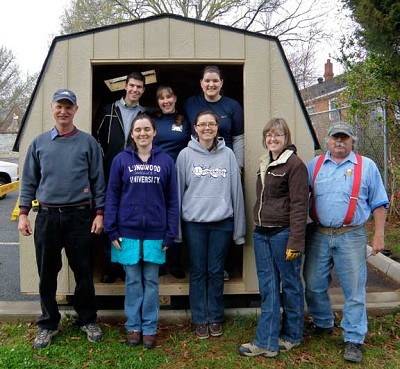 The Longwood University Cormier Honors College vegetable garden now has a shed for its tools, thanks to a grant and some volunteer labor.

The shed, purchased from Wilck's Lake Sheds through a grant from the American Democracy Project (ADP), was delivered unfinished April 1. After the shed arrived, student volunteers, led by experts from Facilities Management, painted it, hung trim, and built a shelf, a rack to hold the tools, and a step up to the entrance.

“I think the shed has sparked more interest in the garden, which is wonderful,” said Jennifer Beach, director of the vegetable garden, which is beside one edge of Wheeler parking lot near the corner of Griffin Boulevard and High Street.

Before now, the tools were kept in a storage room in Chichester Science Center where they shared the space with biology equipment. Two rain barrels – one next to each side of the shed – were recently donated by Clean Virginia Waterways, which is based at Longwood. “Then it rained the next week, and now they're completely full,” Beach said.

The garden, a sustainability project established in fall 2009, was inspired by the vegetable garden that President and Michelle Obama instituted at the White House the previous spring and also by then-Gov. Tim Kaine's Renew Virginia initiative, a year-long series of legislative and administrative actions promoting renewable energy, creating green jobs, and encouraging preservation of the environment.

The first planting of the year at the garden – sweet potatoes, tomatoes, peppers and pumpkin seeds – was done April 26. “We're hoping to grow carvable Halloween pumpkins,” Beach said. The sweet potatoes were planted as part of a project by students Misty Watkins, John-Harwood Scott and Brandon Caracciolo in an Honors English 400 class taught by Susan Bagby, co-assistant director of the Cormier Honors College (CHC) and adjunct instructor of English. In the project, funded by an ADP grant, the sweet potatoes will be harvested by students participating next Aug. 15-18 in the annual retreat for incoming freshmen in the CHC and will be donated to the local FACES food pantry. Also during the retreat, which is the first half of the Longwood Seminar for these freshmen, Dr. Carl Riden, associate professor of sociology, and Dr. Scott Wentland, assistant professor of economics, will speak to them on local grown food systems. Riden will discuss the sociological perspective of food in society and how the “buy and eat local” movement fits into that, and Wentland will discuss the economics of sustainability. The recent planting was done by CHC volunteers; students from the Honors English 201 class of Dr. Chene Heady, assistant professor of English; the three students in the above-mentioned project; and others who are simply interested in the garden.

Last year in the garden, cucumbers, tomatoes, corn and zucchini were planted. Cabbage and greens were planted in fall 2009. Much of what is grown ends up at FACES.