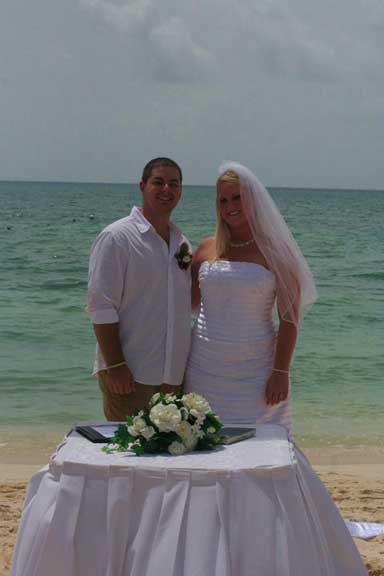 The marriage of Ashley Dawn Bolt, of Farmville and Radford University, daughter of Steve Alan and Terri McFadden Bolt, of Farmville, to SGT David Alex Paquette Jr. of Meherrin, son of David Alex Paquette and Cheryl Paquette, of Cumberland, was a barefoot beach wedding July 10, 2010, at Playa del Carmen, Mexico, with 23 attending. The couple and their families stayed at the Grand Sunset Princess Resort in Riviera Maya.

The Rev. Gabriela Joublanc, of Mexico, performed the double-ring ceremony.

The bride, escorted by her father and given in marriage by her parents, wore a long white, strapless gown embroidered with accented baby pearls and sequence. A white veil accented the gown. She carried a bouquet of white roses.

Ms. Shelley Watson cousin of the bride, of Richmond, sang “There is Love.”

Mrs. Flora Woodson Bolt, grandmother of the bride, of Farmville, gave the scripture reading from First Corinthians, 13th chapter, referred to as the “Love” chapter.

The couple stayed at the resort until Friday on their honeymoon before returning to the states. They are making their home in Meherrin. The bride will graduate from Radford University in May with a Bachelor's degree in Nursing and Psychology. She will apply for her license as a registered nurse. SGT David Alex Paquette Jr. will continue working for the Virginia Army National Guard.