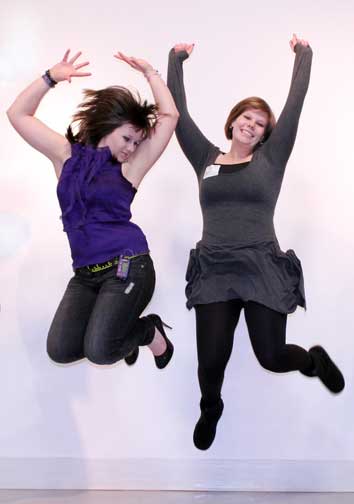 Joining the ranks of museums like the Virginia Museum of Fine Arts in Richmond, the Chrysler Museum of Art in Norfolk, and the University of Virginia Art Museum, the Longwood Center for the Visual Arts has received national recognition from the American Association of Museums (AAM). Accreditation from the AAM is a seal of approval for the LCVA's high professional standards and dedication to public service. Across the country, only 4.5 percent of all museums are accredited.

In honor of the LCVA's accomplishment and its general contributions to the cultural and economic health of the region, on March 27, the Town of Farmville proclaimed that April 2011 is “LCVA Month.” Councilmember David Whitus read the proclamation at the LCVA's opening reception for its annual youth art exhibition. The proclamation called the art center “an essential part of the Farmville community” that “offers a vital service to this region,” not only for its work with area schools, but for the community as a whole.

LCVA Advisory Board president Julie Kline Dixon notes, “I'm delighted and flattered to have been president of the board when this good news came through. But of course, the accreditation was made possible by the efforts of many previous presidents and the Longwood administration. Advisory board members past and present, LCVA staff members, volunteers, and the strong support of our community have made possible this tremendous accomplishment.”

Accreditation is important on a number of levels. It validates the work of the museum, providing confidence to current and potential donors of the excellence of the LCVA's programs, policies, and its stewardship of artworks given or loaned to the center. It fulfills a long-time goal of the staff and board and supports Longwood University's overall commitment for departments to be accredited by their associated professional agencies. Finally, it communicates to the region and beyond the value and excellence of the art center's exhibitions and educational programs, helping the LCVA continue to attract visitors and attention from across area, region, state, and beyond. Recent exhibitions and programs at the LCVA have attracted visitors or inquiries from individuals and museums in Connecticut, Maryland, Massachusetts, New York, North Carolina, Texas, Washington, D.C., and West Virginia.

A department of Longwood University, the LCVA receives about 36 percent of its operating budget from the university. The remainder, however, comes from local and regional supporters, including municipalities, businesses, foundations, and individuals. To make a gift to the art center, make checks payable to LCVA and mail to LCVA, 129 N. Main St., Farmville, VA 23901.

The LCVA is open 11 a.m. to 5 p.m., Monday through Saturday. Current exhibitions include the youth art exhibition of works from nine counties; opening on April 9 will be works by students graduating from Longwood's art department, as well as selected gifts made to the art center during 2009-10.