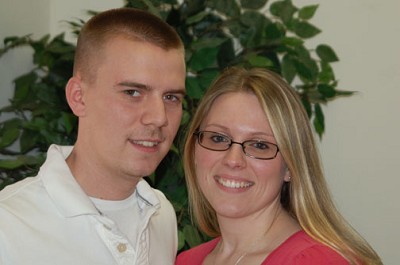 WVHL Kickin' Country announced today Jennifer Spencer and Jonathan Garrett as the winners in the 2011 Kickin' Country Dream Wedding Giveaway. The lucky couple will receive their dream wedding donated by nine local businesses and valued at $10,000 on September 24, with reception at The Carolyn Baldwin Lake Pavilion.

Jennifer and Jonathan became the winners by receiving the highest amount of votes from online voters. They were chosen from a group of 10 qualifying couples after three rounds of online voting that began on January 31.

“We are delighted for this couple and have enjoyed the excitement that this contest has generated” said Larry Armes, operations manager at WVHL Kickin' Country. “We are especially grateful for our talented group of sponsors who have donated the necessary elements to make their dream wedding a reality”.

The final round of voting began Monday February 21, and the public voted for their favorite couple on the contest website (www.wvhl.net). Each couple's picture and story was listed. Voting ended at 11:59pm Thursday, March 3, and winners announced the following morning.