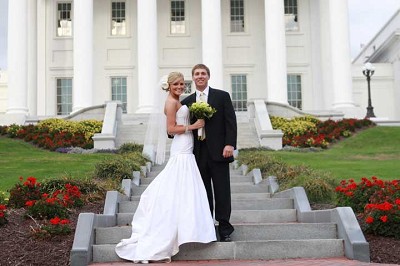 The marriage of Miss Amy Renee Nicholas, daughter of Mr. and Mrs. Dwight Nicholas of Richmond, to Jason Ryan Rostan, son of Mr. and Mrs. Raymond Rostan, of Farmville, took place on November 6 at Main Street Station in Richmond.

The bride, escorted by her father, was presented in marriage for the double ring ceremony.

Julius Brownley was the event planner.

A rehearsal dinner hosted by Mr. and Mrs. Rostan was held on November 5 at The Water Grill in Richmond.

The reception hosted by Mr. and Mrs. Nicholas took place at Main Street Station in Richmond.

The newlyweds honeymooned in Antigua and currently reside in Midlothian.

The former Miss Nicholas graduated from Longwood University and is currently pursuing a master's degree from the Virginia Commonwealth University School of Education.

Mr. Rostan graduated from Hampden-Sydney College and is the assistant lacrosse coach at his alma mater.