Twice Is Nice – A Sale To Benefit All 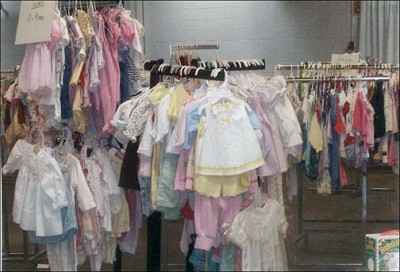 As the name implies, Twice Is Nice Children's Consignment Sale set for April 8-9 serves more than one purpose.

A fundraiser of the Prospect VFD Auxiliary, the sale allows consignors to profit from clothing their children have outgrown. Shoppers also take home considerable savings on “like new” clothes they purchase at the sale. Last but not least, any donated clothing that does not sell is given to the Pregnancy Center or Suzi's Closet.

It's a win-win event for all concerned.

To qualify for the sale clothing must be in season and laundered with, of course, no stains or holes. Clothing and furnishings/toys must be clean and have all parts.

“Some of the clothes still have tags,” stated Linda Franklin of the Auxiliary. “Consignors set the prices – they're very reasonable.

With Easter just around the corner, the consignment sale makes sense for thrifty moms and dads.

“Because of the economy now, this sale is a great deal,” Franklin affirmed. “The clothes are like brand new.”

Like the other fundraisers the Auxiliary holds during the year, proceeds go directly to benefit the fire department.

“Prospect Volunteer Fire Department is buying a new truck, and the proceeds will help with that,” the Auxiliary member stated.

The Auxiliary, which currently has 16 members, has donated many needed items to the firefighters in the past.

The Auxiliary holds numerous suppers and dinners during the year. The next fundraiser is a spaghetti dinner on May 14. A chicken dinner is scheduled for June.

Other Auxiliary donations to firefighters include a generator, a GPS, a drill, ladder covers, a Sawszall, and an exhaust fan for smoke removal. The Auxiliary also contributed to the purchase of a brush truck.

The Twice Is Nice sale, which is held twice a year, has been a successful fundraiser since its beginning in 2006.

Several days before the event, Auxiliary members meet at the firehouse to sort and arrange the items.

“Everything is sorted by size,” Franklin noted. “All shoppers have to do is go to the rack – and shop.”

Helping the local fire department in their work of fighting fires is, of course, a benefit to all who live in the Prospect area.

“We help the firefighters who help everyone who lives in the community,” Franklin concluded.

Helping both firefighters and community – the name says it all: Twice Is Nice.

The Twice Is Nice Children's Consignment Sale will be held at the Prospect Fire House. The hours are Friday, April 8, 9 a.m. to 8 p.m., and Saturday, April 9, 8 a.m. to noon. For further information contact Linda Franklin, 574-6579.