“Road To Africa” Leads To Success 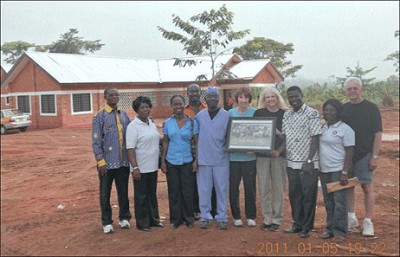 Dr. Kwabena Donkor has been on the “Road to Africa” raising funds and support to build a medical clinic in rural Ghana for the past eight years. Now that road is paved with success – the Ama Nyame Memorial Medical Clinic is ready to open.

Before the first fundraiser in Farmville in 2006 Dr. Donkor stated, “Right now, the key is to get a structure on the ground.”

Now three buildings are completed and a fourth is scheduled to for construction next January.

ANMMC is almost ready to open its doors.

“By the end of April we plan to open,” the Farmville doctor stated. “We have the physician/nursing staff in place and have some medical supplies – all of that is on site.”

Heading the medical staff will be Dr. LaDonna Regier, who gave up her medical practice in Colby, Kansas, to come to Africa. Another local doctor from Ghana will work with her.

Dr. Donkor met Dr. Regier when he was invited to go to Kansas in 2006 to speak to the Rotary Club about his project. Since then members of that Rotary Club have traveled to Africa to help construct one of the buildings as well a road to the clinic.

“The outpatient building the Rotary helped build is going to be an outpatient area,” Donkor stated. “Right now it's pretty much finished.”

“Dr. Regier can't wait to get started,” Dr. Donkor added. “She's ready to go out there in the bush!”

The Ama Nyame Medical Center is named for a mother in rural Ghana who was a victim of the inefficient government-owned health care system. By the time appropriate health care was provided she developed severe anemia and died.

In rural Ghana, lack of adequate medical care for ailments that would be considered minor in the United States spell financial ruin for entire families.

“I have lived with and witnessed the human misery that diseases inflict on individuals in developing countries,” stated Donkor, originally from Ghana. “In addition to physical and emotional pain many of the sick ultimately lose their basic human dignity.”

That was the impetus that inspired the ANMMC project. The first building was completed in 2008.

A dormitory is the most recent addition to the complex.

“It has five sleeping rooms and three private bathrooms, a living room, storage, kitchen and dining area,” Donkor explained. “It can house five doctors or nurses.”

In addition to the director, the clinic has hired a midwife who will stay on the premises.

“We have three nurses – two general nurses and a younger nurse midwife who will stay close by,” he added. “We have a clinic building which will start off with a maternity wing, a general surgery wing and a medical wing.”

All that remains to be done before the clinic opens are administrative details and connection of electric service.

“We recently put posts all the way to the campus,” Donkor noted. “We already have a well and we have a water tower – we just need a big tank to put on top.”

“In Africa the power goes off just like that,” Donkor explained. “For our purposes we'll need the equivalent of a generator for a house, one for each building.”

“We are now looking for some simple medical equipment to do lab tests,” the doctor continued. “We need hematology, chemistry and ultrasound equipment. If we can get these we'll be self-sufficient.”

While all donations are welcome, monetary ones are often the most helpful. Last year Dr. Donkor sent a shipping container full of donated items and equipment to Ghana. The cost for shipping was $5,000.

“There were a lot of headaches,” he added. “It took two months to clear the shipping container from port once it reached Ghana – and every day it sat there I had to pay port fees.”

Because of the distance most people will need to travel to reach the clinic and because most of them will arrive on foot, an ambulance is almost a necessity.

“This ambulance is very important to me,” Donkor said. “I've seen terrible maternal deaths. By the time the mother gets to a hospital 50 miles away the baby is dead.”

"If we can get an ambulance it will really make my year,” he added.

As time for the clinic to open draws near the local people are getting excited. During his last visit to Ghana Dr. Donkor went to see the traditional chief who signs all official documents.

“He told me that he had heard about me,” Donkor related. “He said he'd been told by the people that everybody's waiting.”

How many people are waiting?

“If we provide the service that satisfies people, chances are we could see 200 people going through the clinic every morning,” Donkor said.

“I can't imagine how I'll feel when it's all started and running,” he added

The Ama Nyame Memorial Medical Clinic is more than a “Road to Africa” – it marks the way toward a better way of life.