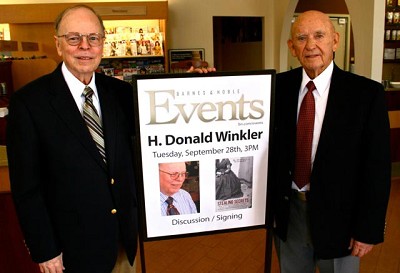 Former Farmville resident H. Donald Winkler (left), author of the recently published Stealing Secrets, and Robert T. Redd of Rice, to whom the book is dedicated, signed copies of the book at a book signing Sept. 28 in Longwood University's Barnes & Noble Bookstore. All of the bookstore's 47 copies were sold out. “It was the most successful book signing we've ever had,” said Jaime Hillman, bookstore manger. The ceremony marked the world premiere of the launching of the book about female spies in the Civil War. Even though the book signing, which was scheduled to end at 4:30 p.m., the turnout was “steady busy” until 5:15, Hillman said. This is the fourth book, all nonfiction, by Winkler, a Longwood administrator from 1982 to 1995 who now lives in Gatlinburg, TN. Redd was the longtime headmaster/administrator of Prince Edward Academy and is the retired CEO of the Prince Edward School Foundation.