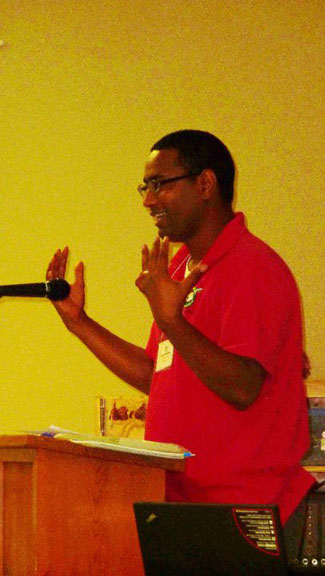 OCC is a mission of the Parent Organization Samaritan's Purse, a mission that sends shoeboxes packed with necessities and toys for children in need all over the world.

“it was so great how the community came together, stated Jennifer Kinne, director of communications, FUMC. “We represent the South-Central Virginia OCC team.”

The counties who serve on this team are Buckingham, Charlotte, Mecklenburg, Nottoway and Prince Edward.

“We had 82 people in attendance,” Kinne continued. “It was amazing to see that there were 27 different churches in attendance, and those churches represented seven different denominations. Eight of the churches that attended were new to OCC this year.”

Guest speaker was Mesfin Gudeta who was born in a prison in Ethiopia. He was raised by his grandmother until he was seven years old and spent much of his childhood after age seven as a street child.