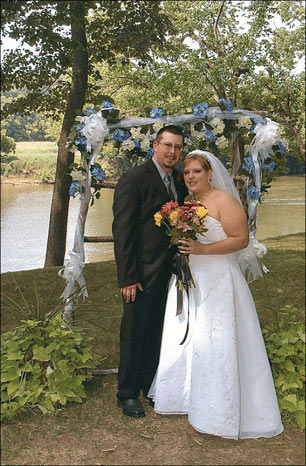 The bride, given in marriage by her father, wore a strapless white gown with crystal beading. She carried a bouquet of wildflowers in a rainbow of colors.

Mrs. Amy Renee Combs, sister-in-law of the bride, of Winchester, was maid of honor. Rachel Hobgood, niece of the groom, was flower girl.

Jerry Shelton, Jr., brother of the groom, of Farmville, was best man. Russell Hunter Combs III, brother of the bride, of Winchester, was usher.
<br />A reception was held at the Shenandoah River in Warren County.

A honeymoon is planned for July 2011.

The couple now reside in Farmville.

The bride is a 2000 graduate of Johnson and Wales University. She is employed as an operations manager by ARAMARK.

The groom is currently enrolled in Southside Virginia Community College. He is employed as an assistant fire safety tech by Hampden-Sydney College.