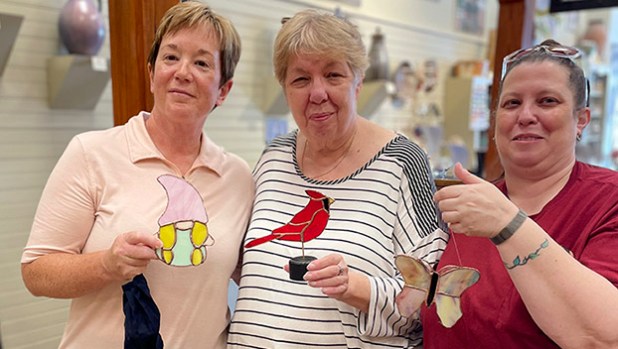 Farmville residents show off some of their creations after attending one of Pam Butler’s classes. 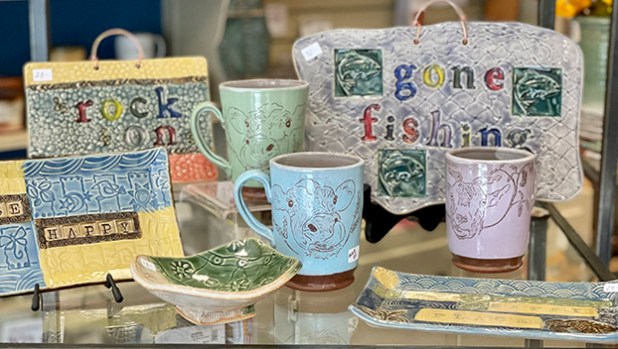 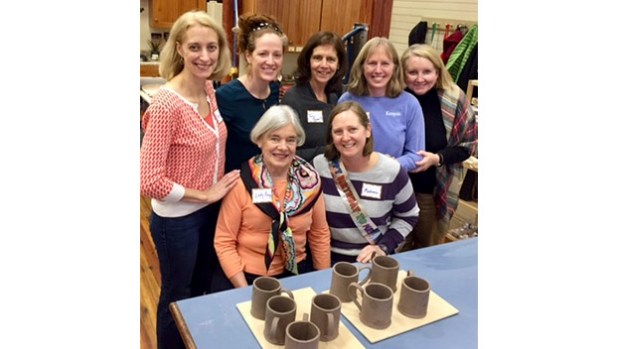 A class from Mainly Clay shows off some pottery that they are working on. 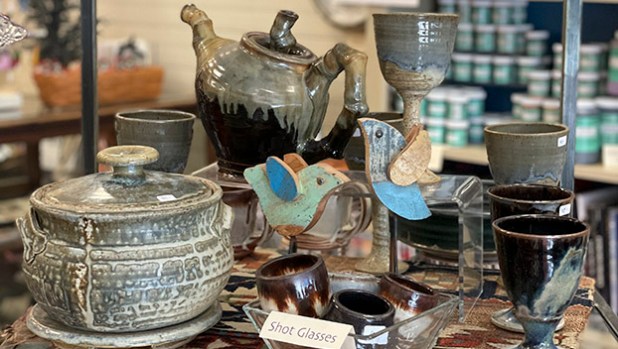 A look at some of the work on display at Mainly Clay on Farmville’s Main Street. 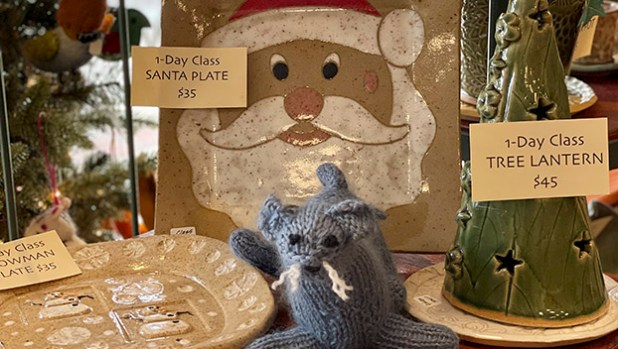 If you look it up in the dictionary, Merriam-Webster defines a craftsman as “a person who makes beautiful objects by hand”. These are people, the dictionary says, that “create or perform with skill or dexterity, especially in the manual arts.” That truly defines the Town of Farmville. All it takes is a drive through the downtown area to see the work going on.

It’s especially true at Christmas. With the season finally here, many people stroll through these shops for some last-minute shopping and encounter everyone from painters to sculptors, from those who knit scarves and teddy bears to folks who create full-blown wood pieces.

After taking a pottery class 11 years ago, Pam Butler realized that Downtown Farmville would benefit from having a similar studio for residents and visitors. With her youngest off to college, Butler decided that she would open one herself.

“It was just an idea that wouldn’t go away,” said Butler. “I knew it was something that I was supposed to do.”

She purchased the former Goodwill store, located at 217 N. Main Street. Then she got to work, creating her own pottery studio and art store known as Mainly Clay. In the store, folks can purchase all the supplies they need to do pottery work including tools, brushes, texture mats, stamps and glaze. Along with these are some unique pottery pieces made in the studio along with scarves, books, greeting cards and other items.

“We find that people typically come to our shop come December and pick up that unique gift,” said Butler. “We have a lot in the $5 to $15 range that are nice to pick up for a small gift.”

FOR THOSE WHO WANT TO TRY

Those who would like to try their hand at this art can sign up for a one-session class. After a few years of having the typical eight-session pottery classes, Butler realized that many people did not want to take on such a large time commitment. Now her one-session classes allow folks to create their own work of art in just one class session. Classes include handbuilding techniques, pottery wheels, stained glass and potholder making.

During the classes, Butler enjoys seeing strangers come into a class and end up talking like old friends. The classes usually take around three hours to finish the project in one day with the pottery classes returning in a few weeks to pick up their finished artwork.

“I definitely enjoy being downtown,” said Butler. “I know it’s not everyone’s thing, but it adds a different vibe as it’s not another office.”

A TRIP TO A RED DOOR

Just up North Main Street is Red Door 104. The iconic red door leads to an art gallery and studio owned by Audrey Sullivan.

Sullivan has created art her whole life as she has worked as an apprentice set designer at the Royal Opera House in Naples, Italy and spent the past 20 years owning and operating a decorative painting business.

In the Red Door 104 gallery, over 20 local artists are on display with a variety of artwork. Sullivan selected the pieces to give a variety for those looking for a great gift. Unfortunately, this will be the last holiday season for the gallery as this portion will close at the end of the year.

“It’s a great place to find something unique for anybody you’re buying for,” she said.

Red Door 104 also offers classes for those wanting to try something new or create something special. The studio offers painting, drawing, mosaic and needle felting. According to Sullivan, she’s always had the love of art and loves having the opportunity to teach and share with others.

Whether that last-minute gift is for a family member, a coworker or something to treat yourself, it might be close to home in a small shop Downtown.

“I encourage people to get out and support local people,” said Sullivan. “We need art in our lives.”