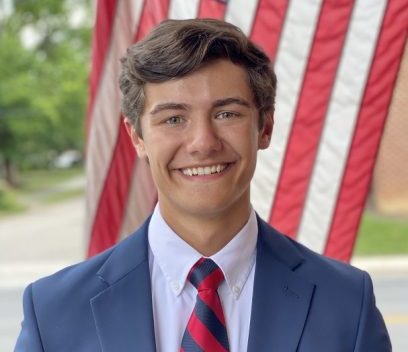 FARMVILLE – Some races Tuesday night came down to just one vote. In the race to be the next District 1 representative on the Prince Edward Board of Supervisors, that wasn’t the case at all. Harrison Jones made history, as the 20-year-old beat Dr. Peter Gur to claim the seat. Jones becomes the youngest person ever to hold the position. He also had one of the largest win percentages on the night, collecting 59.6% of the vote.

“It means so much,” Jones said. “I’m really honored at the faith people have shown in me. I’m thrilled to be able to serve. Even though I am young, I’m fully capable of representing everyone at the highest level.”

Jones also gave credit to Dr. Gur, who he said ran a great race. It was a unique race in that there was really no true incumbent. Gur had been appointed to the position in August, filling the spot left empty a month before when Beverly Booth resigned. In her July resignation, Booth said she was stepping down due to health reasons. She had served since January 2020, getting elected after more than a decade as the county’s commissioner of revenue. Booth served in that position from September 2007 to November 2019.

Now Gur turns things over to Jones, who said he looked forward to serving local residents. The seat also means something more to Jones. His great-great-uncle Winky Smith served as District 1’s representative more than 40 years ago.

“So to be able to win was really special,” Jones said.

He also comes in with clear support. In Tuesday night’s vote, Jones won a majority in everything from the in-person vote to absentee ballots.

But now that he’s won, what happens next? That was the question the new Board of Supervisors member was asked Tuesday night. During the campaign, he had told The Herald that the key to Prince Edward’s future lies with allowing businesses to thrive. Prospering businesses provide good-paying jobs. Good-paying jobs open the door for individuals to advance and provide for their families. Then in turn, that also helps generate revenue for things like school repairs and resources for law enforcement.

Jones echoed those comments on Tuesday, saying he wanted to help the county move forward.

“I want to build connections with my constituents and really do everything we can to help Prince Edward take steps in the right direction toward economic growth,” Jones said. “Just like we said all along, (we need to) help small businesses wherever we can (and) make attractive tax plans for growth.”

The Prince Edward native, who is pursuing a degree in business administration, added that with budget season coming up early next year, he wants to make sure the sheriff’s office has the resources they need. He also wants to spend time with Prince Edward County Public Schools, to do what he can to help them thrive.

“Working to improve everything with the schools is a big priority,” he said. “I look forward to working with the other new board members and building those relationships to help us thrive in the future.”

To learn more about the newly elected supervisor’s goals, you can read the campaign Q & A by clicking here.