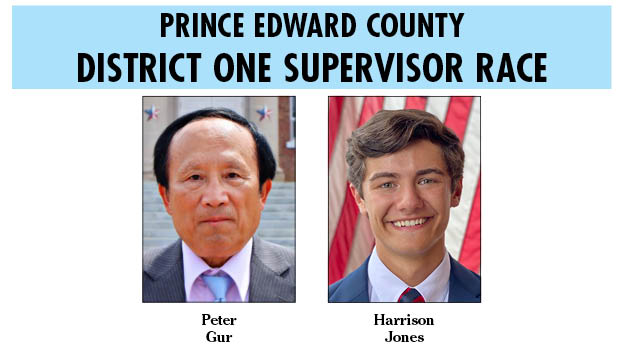 As we move into late October, early voting has already started and for those who want to wait, it’s less than a month until Election Day. With that in mind, we’re reaching out to candidates in all contested races across our coverage area, asking them to answer several questions. Each candidate in a race receives the same questions and the same amount of time to send answers in.

In this edition, we’re focusing on the race to be the next representative for District 1 on the Prince Edward County Board of Supervisors.

Peter Gur currently holds the position. He was appointed on an interim basis earlier this fall to fill the seat left vacant on July 5, when Beverly Booth resigned. In her resignation, Booth said she was stepping down due to health reasons.

Before being selected to be a supervisor, Dr. Gur served as the District 1 representative on the county school board. He’s an adjunct associate professor for Southside Virginia Community College, with an extensive teaching background. Gur worked in Prince Edward schools and also taught at the Governor’s School. He earned his doctorate from Michigan State University in 1987.

Also competing for the seat is Harrison Jones. Jones is seeking to become one of the youngest members of the Board of Supervisors to ever serve Prince Edward County. Jones was born and raised in Prince Edward County and is currently pursuing a degree in business administration. Though young, Jones is confident in his abilities to represent the people of District 101.

1.What is the biggest challenge facing Prince Edward County and how would you address it?

Harrison Jones: For Prince Edward County, our biggest challenge is reaching our full potential. We have so many strengths: we have a wonderful community settled in the Heart of the Commonwealth; we are rich in history and natural beauty, and we are home to two colleges. I cannot imagine a place I would rather call home. As a county, our greatest endeavor should be to maximize our potential.

Peter Gur: The biggest challenge facing Prince Edward is the extensive renovation of the Prince Edward County Elementary School. On December 2, 2021, the Prince Edward County Board of Supervisors voted unanimously to renovate the Elementary School. The cost is now estimated at 45 million according to the county’s 2022-2024 Capital Improvement Plan. I supported funding for schools by attending the 2022 Virginia School Board Association (VSBA) Capital Conference that included the following funding requests:

In March 2023, we will know whether the Virginia General Assembly will approve the additional 1% sales tax in Prince Edward County to support construction of schools. If it passes, the school division will start to renovate the elementary school.

2.Are you satisfied with the current economic growth in Prince Edward? If not, what steps would you take to improve it?

Peter Gur: I am not satisfied with the current economic growth in Prince Edward County.

However, the County may relieve the taxpayer’s’ tax burden through multiple actions. This year the County may consider further reduction of the tax assessment percentage due to the estimated increases in vehicle value.

Currently, the County conducts its general reassessment of real estate every six years. However, due to the volatility of the real estate market, the County’s assessed values have already dropped to 85% of the current market value. Moving to a four-year cycle will help lessen the gap between assessed values and current market values. The County will conduct its next general assessment on a four-year-cycle and become effective January 1, 2025. We need to attract new business to help relieve the tax burden and help the struggling businesses to stay open.

Harrison Jones:  I have learned that there is always room for improvement. We can always spur on more economic growth and that should be a priority of the county. Allowing businesses to thrive provides good jobs and prosperity for all of our citizens.

3.Over the last decade, we’ve seen Prince Edward’s population decline. What steps would you take to reverse that trend?

Harrison Jones: Complex issues can seldom be solved with simple solutions. One step in the right direction is supporting our economy and allowing businesses to thrive. Prospering businesses provide good-paying jobs. Good-paying jobs open the door for individuals to advance and provide for their families. If we take care of our families, the future will take care of itself.

Peter Gur:  From the United States Census Bureau, Prince Edward County’s population was 23,368 on April 1, 2010, and was 21,849 on April 1, 2020. The population decreased by 1,519. I would advocate more affordable housing, better paying jobs, and attracting more businesses.

Hampden-Sydney College, Green Front, and many other stores. For the last few years, some new businesses, such as YakAttack and some hotels, also came to town. They produced hundreds of new jobs.

4. Current projects will help improve broadband around the country. What are other infrastructure improvements the county needs?

Peter Gur: On May 12, 2020, the Prince Edward County Board of Supervisors allocated $1.9 M to purchase 280 acres of land for the Data Center. It is just off the Persimmon Tree Fork Road with access to both Mid-Atlantic Broadband (MBC) fiber and water from the Town of Farmville. The County plans to proactively market the site with help from Dominion Energy, MBC, and the Virginia Economic Development Partnership.

During the last 10 years, apartments, stores, a movie theater, restaurants, and hotels have been built in the Sunchase Boulevard neighborhood. Recently, the County also planned to market a data center off the Persimmon Tree Fork Road. The travelers from the Lynchburg direction can use this interchange to go to these places directly, and they don’t need to go through downtown Farmville. It will help District 1 become more prosperous.

Harrison Jones: Broadband is critically important. Strong internet access is imperative for students, and professionals working from home, especially in our current age. Any investment in our county concerning infrastructure that will improve the lives of our citizens, our economy, or our education deserves our full attention.

5. What role do Hampden-Sydney College and Longwood University play in the county’s future? Is Prince Edward doing everything necessary to help with that role?

Harrison Jones: Prince Edward County is very fortunate to be the home of both Hampden-Sydney College and Longwood University. We should do all we can to strengthen our relationships with both schools. It’s a great opportunity for partnership and one we should take seriously.

Peter Gur: I taught for seven years at the Governor’s School of Southside Virginia at the Longwood University instructional site. On October 4, 2016, Longwood University (LU) hosted the Vice President Debate. It brought Farmville into the national spotlight. Last school year, I watched the LU Men’s basketball’s last two home games. I also attended the 2022 NCAA Men’s and Women’s Basketball Tournament Selection Shows at the University. It was a very exciting experience.

In August, I also visited Hampden-Sydney College’s new science building. The classrooms are connected to each other. The College also plans to renovate the Alphabets, Carpenter Houses, Venable Hall, and Whitehouse over three to four years. It educated many notable U.S. leaders since 1775, and it will continue to produce notable leaders. I fully support Hampden-Sydney College’s Master Plan and Longwood University’s Master Plan.

6. What can Prince Edward do to better market itself to the rest of the Commonwealth and beyond?

Peter Gur: Farmville is America’s first two-college town. It is full of colorful history. At the end of the Civic War, Lee retreated through Farmville. On April 21, 1951, Barbara Rose Johns led a student strike at Robert Russa Moton High School. Prince Edward also has many events, such as the Five County Fair.

The County Department of Economic Development & Tourism published a pamphlet: “VIRGINIA, Farmville and Prince Edward County, The heart of your ADVENTURE.” The pamphlet was distributed to the Virginia Welcome Centers and all visitor centers.

Harrison Jones: I was born and raised here in Prince Edward, so I can truly appreciate what we have to offer as a home place. We are the epitome of small-town America. We can advertise our parks, the campuses, downtown, our natural beauty, and areas for development to showcase what an amazing place Prince Edward is.

7. What is your vision for Prince Edward? How would you like to see it change in the next 5-10 years?

Harrison Jones: Prince Edward is an amazing place to call home. As we move into the future, I want us to take steps to maximize our potential. We can grow to become an even better version of what we are today. This community means so much to me. It is exciting to have the opportunity to serve Prince Edward and help us advance. I believe our best days are yet to come.

Peter Gur: In the next 5-10 years, the COVID-19 pandemic will be over. My vision for Prince Edward is that it will become a more progressive, diverse, and inclusive county that honors its heritage and collaborates with our citizens to achieve prosperity, educational excellence, and lasting public safety, while ensuring fiscal responsibility.

Longwood University will increase its enrollment to 6,000 students and continue to compete at NCAA Tournaments. Hampden-Sydney College will complete its renovation projects. Prince Edward School Division will make at least two schools fully accredited. Fuqua School will also have more students. Prince Edward’s high inflation will be over, employment will be increased, and residents will have more income. The college town will become prosperous again.