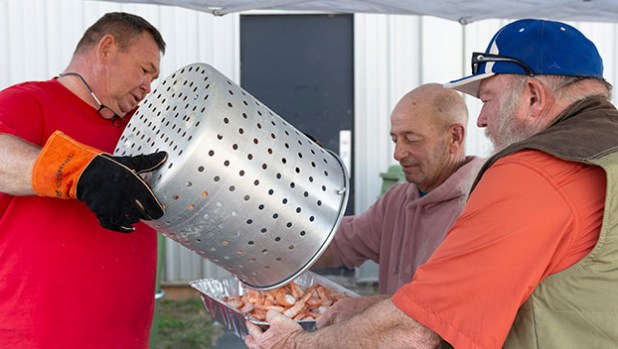 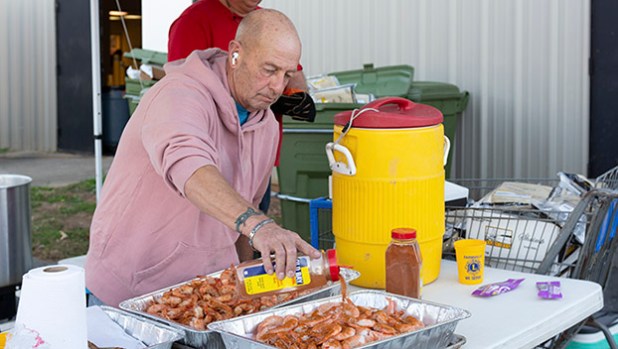 Michael Strasburg adds Old Bay seasoning to the shrimp as part of the kitchen prep. (Photo by Connor Thompson) 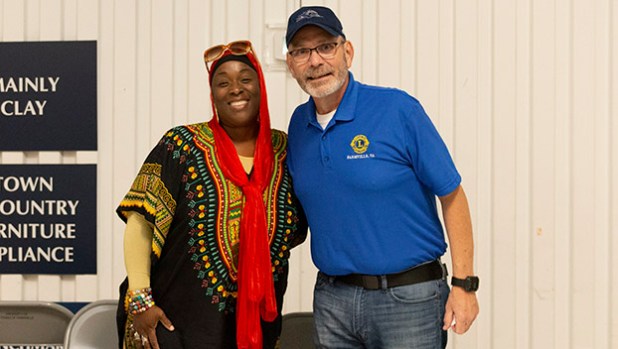 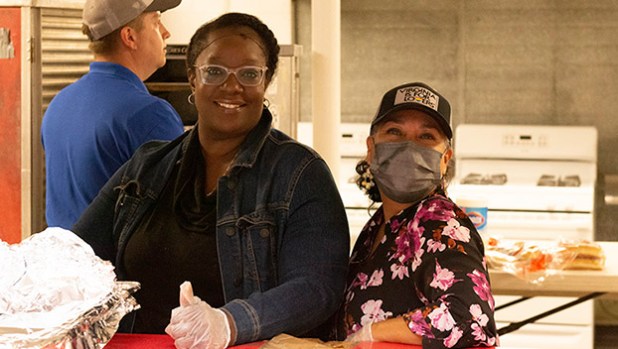 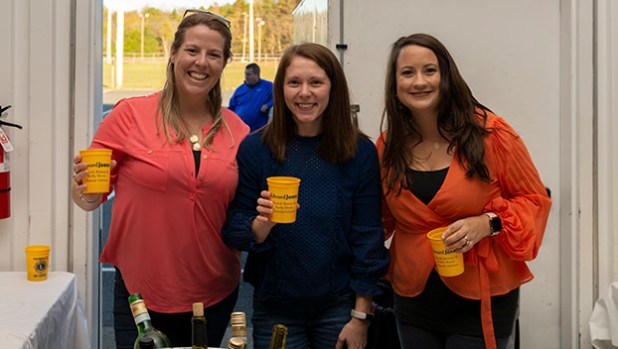 From left, Molly Kinahan, Hannah Ramsey and Anne Tyler Paulek were just some of the residents who came out to enjoy the Lions Club’s latest event. (Photo by Connor Thompson) 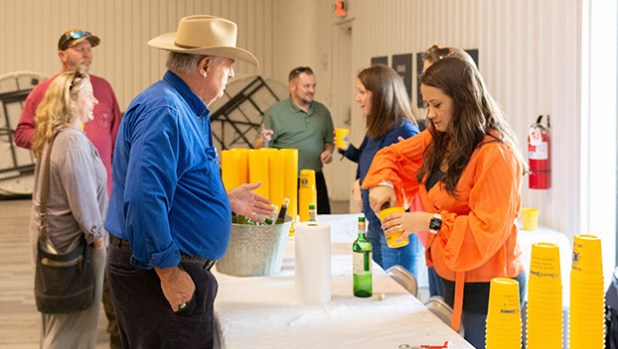 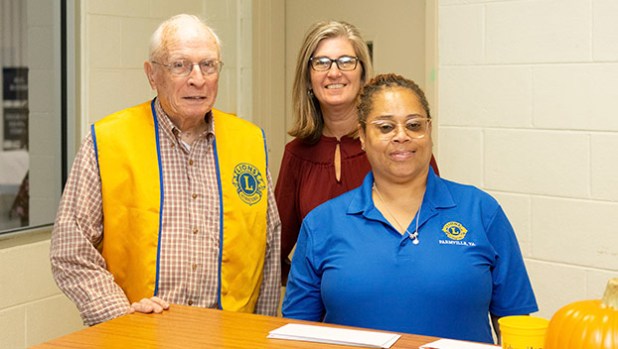 The Farmville Lion’s Club has served the town for almost 100 years. This year, the club found a tasty new way to bring people together and raise money for a good cause.

In the past, the Farmville Lion’s Club was known for its annual golf tournament fundraiser. However, after the COVID-19 pandemic created a pause for many annual events, the club decided that this was a good time to go in a different direction.

“We wanted to create a new event that the community could come out and enjoy for a fundraiser,” said Farmville Lion’s Club President Dr. Scott Davis. “We want to do a festival or something so we came up with Shrimp Fest.”

On Thursday, Oct. 27, the Farmville Lions Club hosted the first Shrimp Fest at the Sports Area. Luckily for those who attended the venue was changed to indoors to save everyone from the cold fall weather. For this event, tickets were $35 and included a large plate of steamed shrimp, baked beans, coleslaw and hushpuppies along with all-you-can-drink beer and wine. This gave an opportunity for folks to eat good food, listen to live music and catch up with their neighbors.

ALMOST A CENTURY OF WORK

The money from this fundraiser will go back into the community. That’s a normal thing for the Lions, and has been ever since their creation almost 100 years ago. The Farmville Lions Club was chartered on June 23, 1923, made up of 31 people from local government, business and education. The goal at the time was to support community projects, “designed to enhance the area’s amenities to residents, guests and prospective commercial interests.”

Several landmarks in Farmville came about due to the Lions Club’s goal. Soon after being chartered, the club received a number of grants and helped fund what was then known as Southside Hospital. Now, that’s known as Centra Southside Community Hospital, providing help for people across the entire region.

Then came Hotel Weyanoke. The Lions helped provide grants for that project as well, seeing it open in 1925. And it had a major impact on the area. Once the doors opened, with train service both east and west, Farmville became known as a convention center. Statewide groups took notice. Between 1926 and 1928, the town hosted 10 statewide conventions.

Flashforward to 2019 and the Lions Club was responsible for another project going up. They cut the ribbon on Lions Park, which the club had installed right next to Wilck’s Lake here in Farmville. This was a project that planning started on in 2015. By 2017, the club decided to build the playground, getting a matching grant from the Lions of Virginia Foundation. By the fall of 2018, the Lions gave $65,000 to the town to buy the needed playground equipment.

A LEGACY OF SERVICE

Over the years, this club has amended the intent, building a legacy of service. Their yearly fundraising projects, like the Shrimp Fest we mentioned earlier, provide money for vision screenings, vision exams and help buy eyeglasses for local children, as well as some residents referred by Social Services. They help fund Burkeville Lodge, Virginia’s only camp for the blind, and coordinate with Social Services and the Longwood Speech, Hearing and Learning Services to provide hearing aids for residents that can’t afford them on their own.

“We help people meet the criteria they need to get the glasses and hearing aids they need,” said Davis. “Especially when it comes to kids.”

Other work in the community includes donating to Blue Christmas, which allows police officers to shop with children for Christmas presents. They also host blood drives, donate to the food pantry at the public schools and assist with other needs in the community as they come up.

“Our motto is ‘we serve’ and we do that in many different ways,” said Davis.

Now with 100 years under its belt, the Farmville Lions Club is ready to continue its service for another 100 and hopefully more.