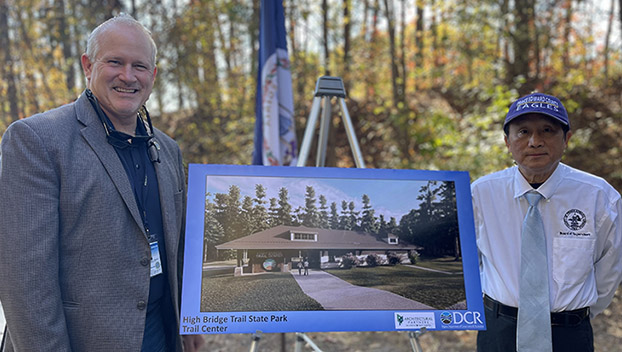 On Monday, local, regional and state officials marked the latest expansion project at High Bridge State Park. Workers will build a new trail center, going up at the eastern end of the actual High Bridge.

RICE – It takes a long time to build a park. And in some cases, that planning and preparation just never stops, as it keeps expanding. That’s the goal with High Bridge State Park, as state officials on Monday marked another expansion project, announcing a new trail center that will be built on the eastern end of the actual High Bridge.

The park’s centerpiece is the majestic High Bridge, which is more than 2,400 feet long and 125 feet above the Appomattox River. State, regional and local officials all took part in Monday’s event.

“A rail to trail is a long linear park that takes years to develop and open,” said Virginia State Parks Director Dr. Melissa Baker. “Since 2008 the park was opened in sections as a major component of the first phase and now we are developing and adding amenities. The High Bridge Trail Center will be approximately 2,600 square feet and will include an exhibit space, offices, lobby area, outdoor deck space and public bathrooms adjacent to the High Bridge Trail. This new center furthers our efforts to protect the natural and cultural resources at the site.”

Where will it be built?

The trail center will be situated at the eastern end of the actual High Bridge from which the park receives its namesake and is the most popular section of the trail. The building will be located about 0.3 miles from High Bridge and there will be an ADA-accessible path to the trail. The trail center will serve as the new centerpiece of the park highlighting the recreational, cultural and historical significance of the trail and resources in the surrounding area.

This building will look a little different from the typical visitor center found at most state parks as it will be linear and will resemble a train station that would have been built for Norfolk and Western Railroad in the early 1900s. The design was based on the 1914 Standard Combination Passenger and Freight Station in the Norfolk & Western Railway Company Standard Plans. The trail center’s unique design will enhance the history of the area as well as bring more modern features to the park.

“We are excited about this project because it will improve the visitor experience at the park, assist us in meeting our mission of providing the best in class outdoor recreation opportunities while also educating the public about the important history of the High Bridge and surrounding area,” said DCR Director Matt Wells. “This will have a major positive impact as the new building will allow the park offices to move to the park’s main entrance, Camp Paradise. The new trail center provides an opportunity for visitors to connect with park rangers, obtain information about the park and the surrounding community and to obtain things needed to enjoy a great day on the trail.” 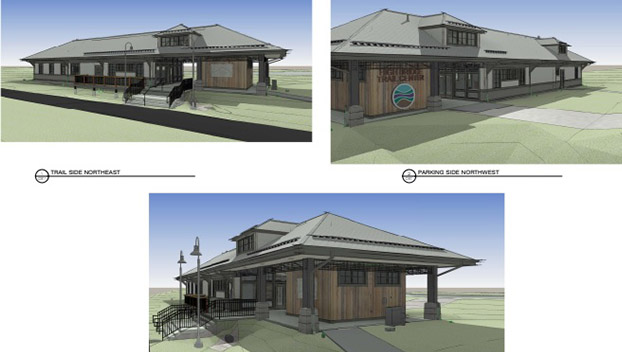 A look at some of the designs for the new trail center at High Bridge State Park.

What will the work at High Bridge involve?

The scope of work also includes a new well for drinking water and drainfield as sewer connections to the building. The existing access road will also be paved.

This work would not be possible without the remaining Virginia Public Building Authority Bonds that were approved by the Virginia General Assembly in 2008. The majority of the work along the existing 30-mile corridor including the trail surface itself was funded with this appropriation. The work is also being supplemented with $2 million of 2021 American Rescue Plan Act funds set aside for Outdoor Recreation.

The local community and Friends of High Bridge Trail have been very supportive of the park and its growing amenities. There is a mobile gift shop that park staff deploy on the trail at Camp Paradise on Friday-Sundays from March-October, but the new trail center will have a gift shop that will be open all year long.

“The success of the trail encompasses the partnerships of the entire community that includes the counties, towns and local business,” said High Bridge Trail State Park Manager Daniel Jordan. “The Friends of High Bridge Trail have equally been an amazing community support organization who have been with us along the way to make our successes, community successes. We are excited to get this project underway as it has been a long time coming. This new center will enhance the visitor experience for everyday users and for the special events and races that we have throughout the year.”

The low bidder from a competitive bid process was Paddox, LLC from Leesburg, Virginia, with a bid price of $1,997,000. The work will be completed in the fall of 2023.