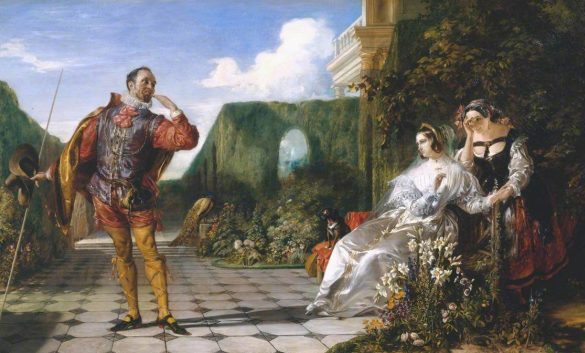 A scene from Shakespeare's 'Twelfth Night', painted in 1840 by Daniel Maclise.

As the curtain opens, the self-consumed Orsino (played by veteran Waterworks actor Anna Stinson) is pining for the melodramatic Olivia (newcomer Melissa Meinhard) just as Viola (Evelyn Wozniak), a young woman rescued from a storm at sea, arrives in town. Throughout the production, audiences will notice that Viola’s earnestness stands in stark contrast to Orsino’s and Olivia’s self-indulgence and fickleness. Indeed, this tension between sincerity and pretention, particularly in matters of love, propels the entire storyline.

In her Waterworks début, Wozniak is a pleasure to watch. In addition to Viola, she nimbly portrays two other characters: Cesario, Viola’s disguise as Orsino’s male servant; and Sebastian, her own twin brother. Wozniak’s ability to juggle three roles with distinct personalities and voices is certainly a strength of the production.

‘THE ENTIRE CAST IS STRONG’

The entire cast is strong, it must be said. Leigh Lunsford, in the plum role of the hoodwinked curmudgeon, Malvolio, embodies the self-absorbed cluelessness of a peacock, producing some of the show’s most gratifying belly laughs.

In Act II, Malvolio’s ill temper and infatuation for Olivia lead to a humiliating ruse concocted by the drunken denizens of Olivia’s household, showcasing the showmanship and comedic talents of Don Blaheta as Sir Andrew Aguecheek, Jay Lynn as Sir Toby Belch, Christy Moore as a saucy Maria, James Shepherd as Feste the Fool, Sarah Varela as the servant, and Logan Schock as Fabian. All of them — at various moments dancing, singing, and scheming — play bumbling, boozy, good-natured fools with aplomb.

The intrepid cast is completed by Erik Varela and Craig Challender, both of whom are double-cast in pivotal supporting roles.

Opening with Orsino’s famous entreaty, “If music be the food of love, sing on!”, this production is an entertaining feast for audiences. Scene designers Billy Tucker and Renée Segroves, costume designer LeeAnn Schock, and production manager Caitlin Linkins are all to be commended for creating a blithe and buoyant ambiance conducive to the wit and silliness of the script. Jordan Whiley’s innovative direction and set design, comprised in part of revolving panels and a masterful use of mirrors in the show’s final act, underscores the head-spinning, self-referential indecision that love can often engender.

The final two performances of Twelfth Night are scheduled for Friday, Oct. 21 and Saturday, Oct. 22 at 8 p.m. at the Waterworks Theatre off Industrial Park Road. Tickets are $12 and can be purchased online at waterworksplayers.org.

DR. WADE EDWARDS is the associate dean of the Cook-Cole College of Arts & Sciences at Longwood University. He is also a professor of French in the school’s department of English and Modern Languages.

UP NEXT: Want to learn more about the Waterworks Players? Click here to read reporter Rachel Austin’s story about them.