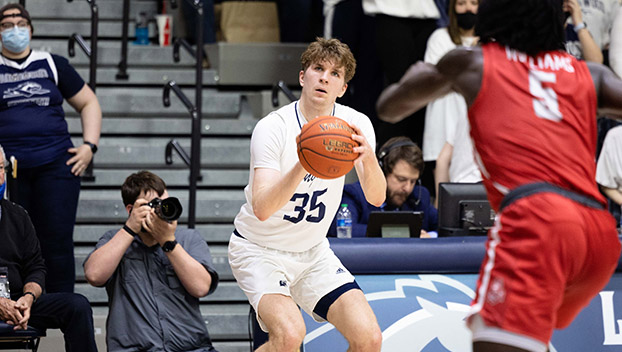 FARMVILLE – What’s the best way to gear up for a rough-and-tumble Big South men’s basketball schedule? For the Lancers, the answer is to battle through a challenging non-conference slate.

The Longwood men are set to do that, as Griff Aldrich unveiled the team’s 2022-23 non-conference schedule.

The 12-game non-conference slate out of a possible 13 games features a mix of high profile matchups from 10 different conferences, including SEC stalwart Alabama and American contender Wichita State in addition to regional matchups with George Mason and Virginia Military Institute.

A seasoned Longwood squad that returns four starters, seven players that played more than 400 minutes and nearly 75 percent of its total minutes will attack that non-conference schedule that features six home games and six road tests. The reigning Big South champions will face their longest road stretch during a four-game swing in December. Longwood’s longest homestand is a five-game stretch in November.

Longwood opens the season with trips to Alabama on Nov. 7 and George Mason on Nov. 11 before coming back home to play five straight in Farmville. Following their home opener against Pfeiffer on Nov. 13, the Lancers will host a multi-team event for the second straight year.

This year, Virginia Military Institute, Fairleigh Dickinson University and Southern Illinois University at Edwardsville will head to Willett Hall for three days, Nov. 18-20. The classic features six games in that three-day span, as every team plays each other in a round robin for a weekend full of basketball.

In December, the Lancers play four straight away from home for their longest road trip of the season, with trips to Delaware State, Wichita State, Saint Francis-Brooklyn and The Citadel coming over a two-week span from Dec. 3 to Dec. 17. The team then hosts South Carolina State prior to Christmas on Dec. 20.

From that point on, the Lancers will dive into an 18-game conference slate.

Sunday, Nov. 13 vs. Pfeiffer in Farmville

Saturday, Dec. 17 at The Citadel in Charleston, South Carolina

You can read about the team’s conference schedule by clicking here.