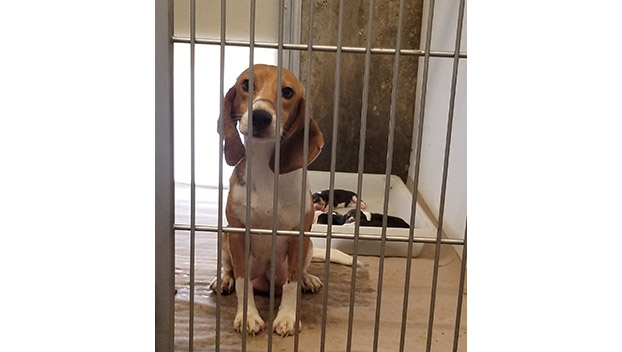 The Envigo dog breeding facility in Cumberland has many violations of the Animal Welfare Act and PETA released an undercover investigation of Envigo. (Photo courtesy of People For The Ethical Treatment of Animals)

The owner of a Cumberland County dog breeding facility will be held “to the fullest extent of the law,” U.S. Sen. Mark Warner, D-Va., told reporters Wednesday, June 8.

Envigo, an Indiana-based company, had an estimated 5,000 dogs at the Cumberland facility, where alleged animal welfare violations prompted a federal investigation. Some 500 puppies introduced each month were sold across the country and around the world for laboratory testing, authorities say.

Warner said he worked alongside U.S. Sen. Tim Kaine, D-Va., to coordinate the seizure and surrender of nearly 450 dogs. This came after Warner’s demand for immediate action by the U.S. Department of Agriculture’s Animal and Plant Health Inspection Service (APHIS) when more than 70 animal welfare violations were reported at the facility.

“The Department of Justice has taken over the investigation,” Warner told Virginia media outlets, including The Farmville Herald, in a conference call. “We’ve already been able to rescue 450 puppies; most of these are beagle pups who were abused in experimentation. … Hopefully they are now on the path towards getting the kind of home and love that they deserve.”

The process started in July 2021, when the USDA cited Envigo on 26 violations of the federal Animal Welfare Act. Out of the 26, 12 were critical, meaning they had severe effects on the animals’ well-being. During a checkup in October, the USDA found another 13 violations with 11 repeating and seven critical. People for the Ethical Treatment of Animals (PETA), an animal rights group, went undercover at Envigo to expose the inhumane treatment of the beagles and reported the same violations.

According to Warner, there are still over 3,600 dogs still at the facility. Warner plans to make sure that these dogs, mostly puppies, are kept safe.

“I’ve had dogs throughout my life and my three daughters have all grown up with dogs in our household,” he said. “My dog Finn, I couldn’t imagine when he was a puppy enduring the kinds of awful treatment that has gone on in this facility. We need to hold Envigo to the fullest extent of the law.”

Warner and Kaine support the Puppy Protection Act, an amendment to the Animal Welfare Act that would include additional care and safety standards for breeders like Envigo. The bill was introduced in April 2021. As governor of Virginia, Kaine signed a bill imposing stricter legal penalties for dogfighting.