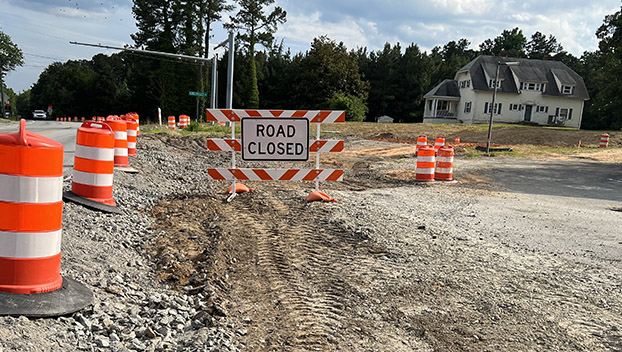 Residents of Prince Edward County have a new traffic pattern to watch for in Kingsville this summer.

On Monday, June 6, road closures and detours were put up by the Virginia Department of Transportation (VDOT) at the Route 15/133/692 intersection. This roadwork is for the installation of a new traffic pattern consisting of a roundabout to help the flow of traffic.

According to Len Stevens, communications manager of the Lynchburg District of VDOT, the current construction is the start of Phase 2 of installing this roundabout. During Phase 2, Routes 133 and 692 will remain closed with a detour for 56 days, or until Aug. 1. Route 15 will remain open during this phase. Starting in August, Phase 3 of the installation will start with the reopening of Routes 133 and 692. Route 15 will also remain open, but there will be shoulder work.

“We are excited to see the Route 15 and Route 133 intersection project move forward to the final phase of construction,” said County Administrator Doug Stanley. “As planned, the roundabout should improve safety with a more efficient traffic pattern. We appreciate VDOT’s efforts to minimize the closure of Route 133 during the summer months to reduce the impact on Prince Edward County School bus traffic and Hampden-Sydney College operations.”

According to VDOT, the roundabout is being put in to improve safety and overall roadway operations for the area. Roundabouts have been shown to improve safety as they reduce the number of impact points compared to a regular four-way stop from 32 to eight. Safety also comes from the new pattern that creates more efficient and safer speeds.

Prince Edward County residents can look forward to a smoother and safer roadway for the beginning of the next school year.