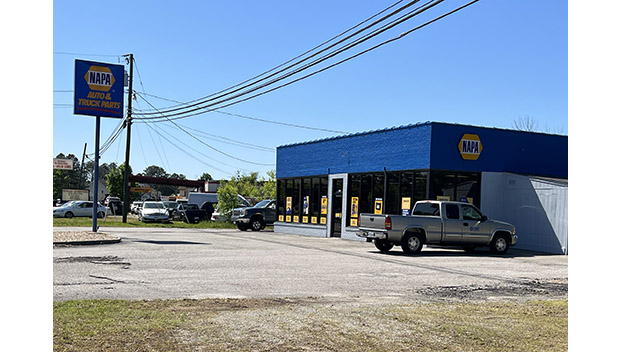 Farmville’s NAPA auto store was bought last month by a new owner who has big plans for the small store.

At the beginning of April, Bryan and April Wright of Wright Auto Supply purchased the NAPA store located at 1210 W. Third St., in Farmville.

The NAPA store was previously owned by Ray and Judy Wooten for over 30 years. The couple was in contact with the Wrights at the beginning of this year to talk about selling. They were ready to retire and spend more time with their children, grandchildren and great-grandchildren.

The Wrights bought their first NAPA location in Blackstone in 1999. In 2017 they purchased two more locations in Lawrenceville and Gaston, North Carolina. Since then, they have added four more, including Kenbrdge, Dinwiddle, Roanoke Rapids, North Carolina and now Farmville. Now all these NAPA locations are also under the Wright Auto Supply name.

“The basic principle we pride ourselves on is building locally with good people,” said Brandon Jenkins, operational manager for Wright Auto Supply. “We try to keep it as local as possible while still growing and staying competitive.”

The Wrights were interested in expanding to the Farmville location because it can be more challenging for single owners to get the products they need since they don’t have a lot of buying power only being one store. However, now that the Farmville location is part of the Wright Auto Supply family, some positive changes and expansions are able to happen to the store.

Farmville residents can already notice the store’s new sign and facelift. Inside, the inventory has expanded and, according to Jenkins, if the store didn’t have it before, they most likely have it now. The store carries automotive parts, heavy-duty truck parts, paint and hydraulic hoses. Even though the location has hired some new employees there are still many familiar faces still there ready to serve Farmville.

“We are looking forward to being involved in the Farmville/Prince Edward area,” said Jenkins.