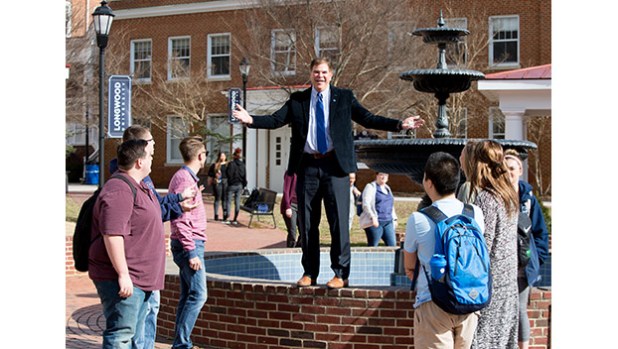 As vice president of Student Affairs, Dr. Tim Pierson always makes time to connect with the students at Longwood University. 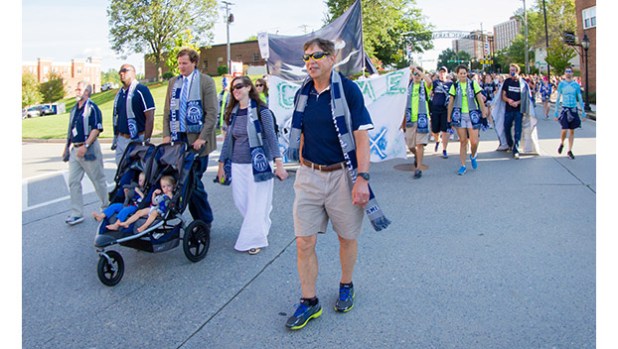 After 30 years at Longwood University, Dr. Tim Pierson is retiring at the end of June from his position as the vice president of Student Affairs.

Pierson, also known on campus as Dr. P, joined the Longwood community in 1992 as the Dean of Students before acquiring his current position in 2000.

Originally from Michigan, Pierson studied at Central Michigan University to earn his undergraduate in business. Before earning his master’s, he spent time substituting at an elementary school which awakened his love for teaching. Instead of getting his teaching certificate, it was easier for him to get his master’s in counseling and student personnel also at Central Michigan. In 1979 while earning his doctorate, he worked at Lyman Briggs College in Michigan State University as the head resident adviser.

“It was a natural fit,” said Pierson. “I was a resident assistant at 23, and I fell into the briar patch that would define my career. You could say I’ve worked with students since 1974.”

From 1982 to 1992, Pierson worked at Willamette University in Salem, Oregon, as the Dean of Resident Life before coming to Longwood.

At Longwood, Pierson oversees student-related areas, including student housing, campus dining, recreation, student conduct and integrity, the counseling center, fraternity and sorority life and campus police. In addition, he would intentionally take time to talk to students and encourage them on their journey.

“Serving Longwood was never a job for Tim Pierson – it was a passion, a way of life, his joy,” said Longwood’s Vice President for Institutional Advancement Courtney Hodges. “Once you have Tim’s trust, he is the most loyal and devoted friend you could ever have. His heart will always be at Longwood and with the countless number of students and colleagues that he inspired, championed and celebrated.”

When thinking of memorable events, Pierson recalled 2016 when Tim Kaine and Mike Pence had a vice presidential debate and this year when the basketball teams won the championships. However, it was the small moments he loved the most.

“I enjoy the day-to-day of being in the office working with talented staff and engaging with the students every day.”

Pierson always supports the Lancers as he loves to participate in Longwood traditions. Students can see him as a regular fixture in the stands cheering on the Lancers at games. In addition, he loves participating each year in The G.A.M.E. or The Greatest Athletic March Ever.  Pierson is always there in his blue and white scarf to show his support as Lancers march a mile and a half from the courthouse to the athletic complex to celebrate the first soccer game of the season.

“Tim has made it his life’s work to help guide young people, and the scope of his impact is immeasurable,” said Longwood President Taylor Revely IV. “I count myself gratefully among the generations of colleagues blessed to experience his wisdom and counsel.”

Even though Pierson is retiring at the end of June from his position as vice president of Student Affairs, Longwood has not seen the last of him. Pierson will still be at Longwood working as a special assistant to the president, helping with alumni connections, basketball and athletics. This will keep him connected with the students, but also give him more time with his family. He and his wife, Mindy, plan to do some traveling and finish remodeling their home in Farmville.