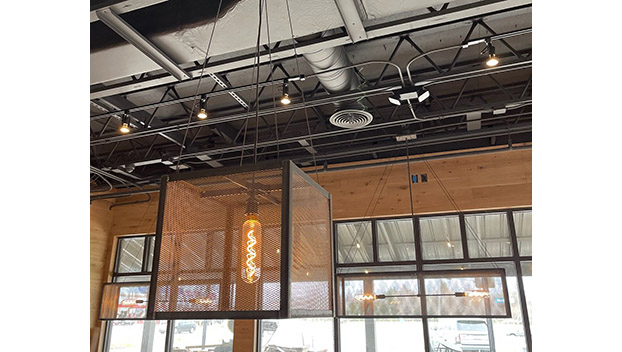 Not wanting to “give too much away” Nash Osborne provided the above photo as a sneak peak of the new location.

The wait is almost over for Farmville residents who are ready for easier access to delicious barbecue, seafood and brews.

The Fishin’ Pig is almost ready to move into its new location at 1807 S. Main St. According to one of the owners, Nash Osborn, they hope to have the new restaurant opened by the end of April.

In the meantime, Farmville residents can still get their Southern cuisine at its current location on Farmville Road. The restaurant is moving to the former Ruby Tuesdays building on South Main Street to have more space and better serve its loyal customers.

Since starting around the beginning of November 2021, many renovations have taken place at the new location. According to Osborn, the building has been gutted to allow more guests to dine in and the business to grow.

“We tried to transfer the look and feel of the old location here with a lot of wood inside and raw materials,” said Osborn. “We’re hoping not to replicate it but have it be reminiscent of the original one with some minor upgrades.”

One of the more notable additions is that there will be more booth seating, as Osborn noted that most guests seem to prefer booths. The new location will also have a patio and an outdoor eating area, more parking and 14 televisions.

The Fishin’ Pig is celebrating its ninth anniversary on Wednesday, April 13, for one last celebration before moving to the new location at the end of the month.

“We’re very excited as this will be good from a food perspective,” said Osborn. “Our catering and events department will have room to grow and the locations traffic volume will be good. We’re excited to join the neighborhood.”

Farmville residents can keep a lookout for announcements and updates on the opening of the new location by following The Fishin’ Pig on its social media.

Statue base on the move