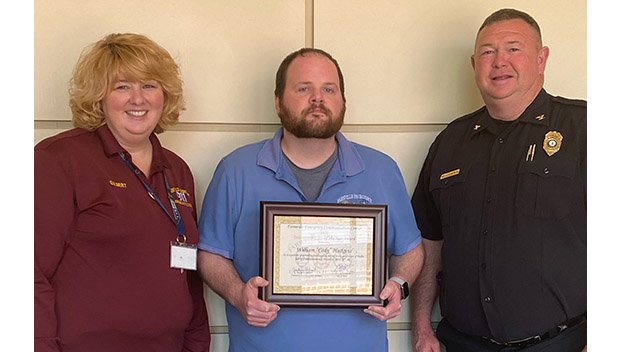 Communications Operator, Cody Hudgins, was selected as the Farmville 2021 Telecommunicator of the Year and was recognized at the town council meeting on Wednesday, April 13. He was nominated by his peers for going above and beyond what is required and for his skill of remaining calm during high-stress situations. It was noted that while helping others, his patience, understanding and knowledge of the job have impacted others in a positive way. Hudgins has been with the dispatch center for just over 10 years, and his hard work and dedication are greatly appreciated. Pictured are Chief Communications Officer Jackie Gilbert, Hudgins and Police Chief Andy Ellington.

Town Manager Dr. Scott Davis presented the proposed budget for the fiscal year 2022-2023. This provided the opportunity for Council to ask questions or schedule a meeting before the public hearing on the budget which is scheduled for the May meeting.

The general fund budget adds the position of a human resources coordinator as a town employee. The town would still use the consulting services for higher-level purposes. The person on staff would be available to answer insurance or retirement questions and more of the day-to-day, traditional services.

The budget will also begin the process of implementing a combination fire department in the slow process of eventually building a fully paid department with volunteers. It will be very volunteer-driven but it meets the first need of having a combined fire service with both paid and volunteers. There will be a full-time chief and the fire attendants will now be firefighters, which is a full-time position with the same hiring salary as a police officer. The budget also adds a stipend on a per-call basis when volunteers respond, which many other localities already do.

“I think that we have people who are invested in our community… and as our community changes and volunteerism changes, we need to have a definitive amount of resources at a given time and these are our beginning steps,” said Davis.

Also, the proposed budget will give raises that will add to the bonuses and raises that Council gave this year. The raise includes a dollar base raise of $500 for those who already got raises, those who did not will get $2,000 for general employees and sworn police officers and public works will get a $3,000 raise.

A few costs will be raised, including the sanitation fee, which will go up by $1 and each tier of the water fund will also increase by $1 to help create a reserve in case of unforeseen circumstances.

In order for this budget to remain balanced, the municipal golf course will close on June 30. The two full-time employees there will be offered another town job in a vacancy they qualify for to transfer. The banquet room will remain available for rent. The golf course is mainly used by out-of-town guests and costs $217,224. To cover the cost of keeping the course open, money would have to come from raises and upgrading needed equipment.

“I believe yes, it is something that people who play golf enjoy; however, it’s not a core service for every resident in the Town of Farmville,” said Davis. “We’ve been having a loss of anywhere between $200,000 and $250,000 a year. I think that this is a time where we need to take that off the table so that we can begin to put money into core services.”

Three years ago Council voted for the Town of Farmville to join with Longwood University and Hampden-Sydney College to help Prince Edward Volunteer Rescue Squad with the funding of an executive director position for the squad and help with the maintenance of their equipment. All agreed to give $15,000 instead of $30,000 and start to help them stand on their own.

Davis is also looking to lease police cars that will end in ownership. Through Ford or the Virginia Local Government Investment Pool, the town will pay the interest and then own the vehicle at the end of five years.

• Police Chief Andy Ellington gave a warning about a recent scam that has to do with wire transfers. The scammers are intercepting emails between people purchasing real estate and local financial institutions. When the deal is about to close, the scammers will send an email with a heading or address that’s one letter off telling the purchaser where to wire the money. Ellington encourages purchasers to be vigilant and call the institution to double-check the email is authentic. Anyone with questions are encouraged to reach out to the police department to learn more.

• According to Councilman Brian Vincent, recent changes to the airport will make it difficult to hold the annual Fourth of July fireworks there. The Recreation Department discussed the possibility of moving the display downtown as a “nostalgic welcome back to smalltown America.” The alternatives are still being looked into at this time.

• There was a public hearing on the redistricting and no one signed up to speak.

• The Town Council gave a proclamation recognizing April as National Poetry Month. Vicky Page with the Friends of the Barbara Rose Johns Farmville Prince Edward Community Library accepted the proclamation and gave an announcement about Poem in Your Pocket Day. On Thursday, April 28, 25 businesses in Farmville will pass out a variety of poems to residents who come by.

• Council voted to approve for the Town Manager to sign a contract to continue bus service to Longwood. This contract will be the same as the one he signed last year.

• In honor of National Public Safety Telecommunications Week the Town recognized Cody Hudgins as the 2021 Farmville Telecommunicator of the Year.