Board awards contract for broadband 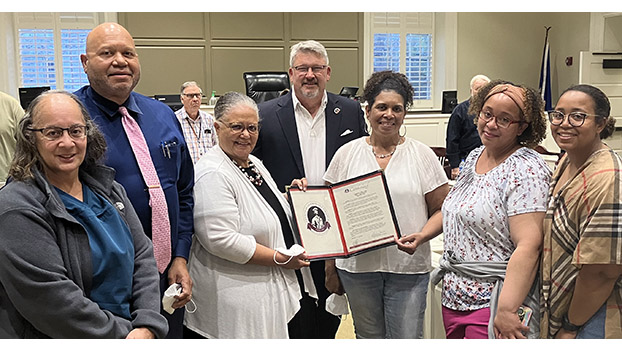 The Cumberland County Board of Supervisors (BOS) presented a resolution of appreciation to Patricia Scales for her service as the first African American Commonwealth’s Attorney in Central Virginia. She served the county for 26 years. Above, from left, are Olinga Scales, Dr. Jeff Scales, Patricia Scales, BOS Chairman Brian Stanley, Rita Scales Mayberry, Bettina Scales and Caylor Scales.

The Cumberland County Board of Supervisors met for its monthly meeting on Tuesday, April 12.

Jennifer Crews, director of finance, brought a contract before the Board of Supervisors during the financial report to award Kinex Telecom to be the contractor for the Broadband expansion.

In the Sept. 14 meeting, the Board voted to commit up to $200,000 in American Rescue Plan Act (ARPA) funds for this project. In November, Prince Edward County advertised a request for proposals (RFP) from private firms to provide an expansion of broadband access and capacity. This will go to underserved or unserved areas of Cumberland, Lunenburg and Prince Edward counties.

According to Crews, the primary purpose of the RFP was to meet procurement requirements and identify prospective firms that could provide broadband services and allow the counties to use the Virginia Telecommunication Initiative (VATI) grant process to leverage state and federal grant funds to deliver its services.

Kinex Telecom was the only proposal received and met the requirements of the RFP, including receiving a grant in the amount of $9,975,489.60 from the Federal Communications Corporation to provide access to the three localities.

According to Supervisor Ronald Tavernier, the area that will be served in this will come up from the Prince Edward County line, straight up Highway 45 and all the way to Route 60. Here it will branch east and west and go down Stoney Point Road.

“We’re going to get quite a bit of coverage from this,” said Tavernier.

For those with more questions on what this covers, the May Board meeting will have a presentation showing what grant and other funding they’ve been able to acquire for this project as well as visually show where the coverage will take place. There will be a time for residents to ask questions and the County staff will explain what areas will be covered and why.

The Board unanimously voted to award the contract to Kinex Telecom for this project.

• The Board approved a resolution of appreciation which was presented to Patricia Scales for her service as the first African American Commonwealth’s Attorney in Central Virginia. She served for 26 years.

• The County Administrator gave an announcement that the bid for the Randolph Fire Station Renovations is now posted and bids are due May 4 to bring to the May 10 Board meeting.

• The Cumberland County Public Library last month had the highest numbers since COVID-19. They still have the COVID-19 tests for those who need them. The library applied for a grant to replace the air conditioning and air pumps and applied for a new grant for young adult material. They got a $3,000 grant for a survey for future planning they handed out at Patriot Day. The community calendar is up and operational. They also received bilingual books to donate to the elementary schools.

• The Board voted to approve an appropriation in the amount of $4,953.46 to reinvest the county’s share of the fund balance with the Commonwealth Regional Council for the next fiscal year.

• The Board voted to approve a budget supplement in the amount of $9,581.26 for a new sound system and hearing assistance system for the Circuit Court.

• The Board approved a budget transfer from the Commonwealth Attorney’s budget to the General Properties budget for the purchase of a 2012 F350 Ford Pickup truck in the amount of $36,000.

• The Board approved a resolution concerning participation by retirees not eligible for Medicare in health insurance programs. This will be for those who are retiring over the age of 50 who worked full time with the county for 10 years or age 55 with five years of service. Those retiring after July 1, 2022 will be able to participate in this new plan. This plan will allow those retirees to purchase health insurance until they qualify for Medicare.

• The Board approved a resolution for proclamation naming April Child Abuse Prevention Month.

• The Board approved the appointment of Tiana Branch as the Cumberland County Freedom of Information Act officer. The Board also voted to appoint Tim Kennell to the Local Department of Social Services Board. The Board also reappointed A. Quinten Parker to the Board of Zoning Appeals.

• The Board voted to approve a writ of the election regarding the vacancy of The Commonwealth’s Attorney seat as Patricia Scales retired. The special election will be held Tuesday, Nov. 8. Wendy Hannah has been appointed to serve starting on April 1.

• A public hearing was held to consider the Proposed County Administrator’s FY22-23 County Budget, the Proposed FY 23-27 Capital Improvement Program, Proposed School Board FY 23 Budget and Proposed 2022 Tax Rates. No one signed up to speak.

• A public hearing was held for changes to the Cumberland County’s commercial building permits fees. Commercial building inspection fees will now be raised to help the department break even in cost while remaining in the middle price range in the surrounding area. No one spoke and the measure passed unanimously.