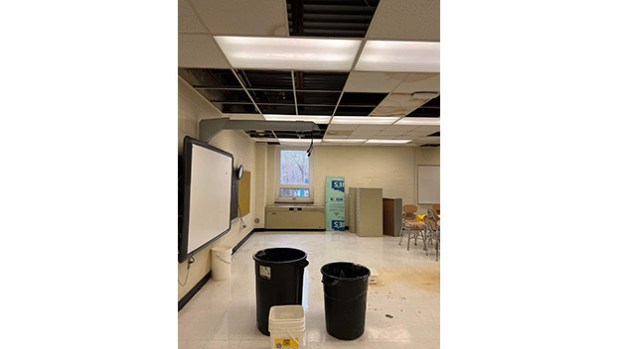 Above is just one example of a classroom with a leaky roof at Prince Edward County Elementary School. 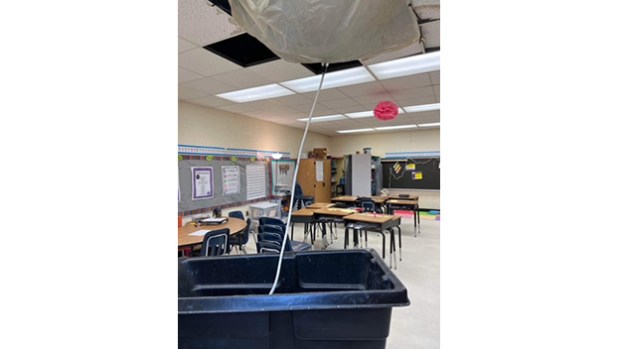 Above is just one example of a classroom with a leaky roof at Prince Edward County Elementary School.

The Prince Edward County Board of Supervisors voted in December to add a 1% sales tax that would go toward school renovations. However, the House panel tabled a bill that would have allowed the county to levy the tax.

Currently, only nine localities in Virginia are permitted to levy a tax like this, and Prince Edward is not one of them. Del. James Edmunds II, R-Halifax, introduced House Bill 63 to allow Prince Edward County to impose an additional sales tax to be used for capital projects in the construction or renovation of schools that residents would vote to implement in November. Likewise, Sen. Jennifer McClellan, D-Richmond, proposed Senate Bill 472, which would have allowed any locality to do so if voters approved the tax in a referendum. Neither passed.

According to County Administrator Doug Stanley, the county is now looking into other options to move forward with much-needed renovation projects, including Prince Edward County Elementary School, where the roof is leaking and causing water damage inside. One option is funding from the General Assembly in the state budget currently being negotiated, but according to Stanley, it is unlikely that this will be funded fully. However, limited funds can be available in the budget for grants and loans.

“We will look to pursue the code change in 2023,” said Stanley. “The proposed (state) budgets do include considerable funding for a state construction grant/loan program to help school systems fund needed capital improvements. We will evaluate such programs and look to apply for the Prince Edward County Elementary School project. We will also look towards the (county’s) fiscal year 2023 budget to see what if any additional funds can be set aside for school capital improvements.”

Students at Prince Edward Elementary School are still attending classes in the building. However, according to Superintendent Dr. Barbara Johnson, there are no students in the few classrooms that have mold or other harmful or distracting damage. The leaks in the roof are routinely fixed, but the leaks travel to new locations, causing ongoing repairs.

“We do not have water falling on children,” said Johnson. “We would never have a child in a room where they are disrupted either by a leaking roof or anything that could cause harm. We don’t want to cause any long-term damage and we know that it is possible.”

On March 18, the school plans to have contractor Monarch give a scope of work laying out requirements and plans for the roof remodel. Then, on March 28, Monarch will come to reassess the roof. The company already looked at it in the fall of 2021, but after a wet and snowy winter, there may be more damage to consider. This will lead to the actual work on the roof taking place in late April and early May funded by Capital Improvement Plan funds. With Standards of Learning standardized testing near that time, the schedule may call for the roof work to be done at night and over weekends to limit noise and distractions for the students.

Other school projects are still moving forward, including the middle school track renovation. Citizens should not worry that the roof is being ignored as many of these problems are being handled at the same time, not instead of each other.

“We have many projects going on at the same time,” said Lucy Carson, School Board chair. “Know that we as a board are united to take steps needed to get the roof remodeled. The students are the most important thing and we want to make sure they are in a safe environment to learn and grow.”

In its Tuesday, Feb. 8 meeting, the Board of Supervisors approved the School Board’s request to set aside nearly $2.8 million in leftover funding from the previous year for capital improvements. According to Stanley, this funding will cover the completion of the middle school track renovation project and begin work on architectural plans for the elementary school roofing reconstruction project while continuing to make temporary fixes.

Johnson said she is thankful for the many parent advocates who have stepped up to ask questions and bring problems to the attention of state leaders. One of the parents, Josh Blakely, spoke at the Wednesday, March 9, school board meeting, saying citizens have called state senators, delegates and the governor’s office and that 400 people signed a letter to lawmakers advocating for funding and many marched in Downtown Richmond with representatives from other localities.

He also addressed, during the public comment period of the meeting, whisperings in the county that the board members may not be aware of, including parents bringing in pediatricians and doctors to evaluate the health effects of this damage, hiring various building inspectors and filing possible lawsuits. He started his remarks with appreciation to the board for its support in attending a livestream of the legislative subcommittee hearing where the sales tax bill was considered.

“What these whispers say to me is that there is great frustration and indeed anger fomenting right now,” said Blakely. “The citizens are dusting off their old civics textbooks and looking around for the legal levers to pull to get their elected representatives to make a change. We’ve tried advocating and calling for change. We’ve protested and made noise. We are using our voices to stand up for the least among us, our children.”