Board approves new boiler for cannery 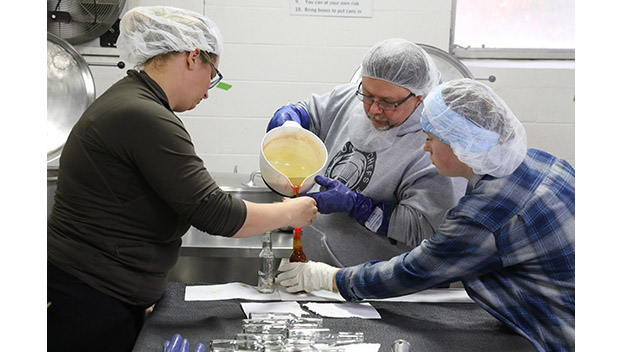 In this photo from 2020 Dale Ford, center, pours a special hot sauce for Devils Backbone Brewing Company into a five-ounce bottle Friday, Feb. 28, at the Prince Edward County Cannery & Commercial Kitchen. On left, Devils Backbone Agritourism Manager Jessica Carter holds the funnel in the bottle at an angle, and on the right, Kayla Vogt prepares to pull away and cap the bottle after it is filled. (Photo by Titus Mohler)

The Prince Edward County Board of Supervisors met on Tuesday, March 8, for their monthly meeting.

Last month, the Board authorized the issuance of an Invitation For Bids to replace the boiler at Prince Edward Cannery that has been in use since 1972. They discussed using funds from the Agriculture and Forestry Industries Development (AFID) Grant from the Virginia Department of Agriculture to cover part of the cost.

According to Randy Cook, building and grounds supervisor, the proposal included both an oil and propane boiler to replace the current oil boiler. While talking to contractors, Cook learned that the industry is switching to LP-Boilers, which uses propane. This boiler uses propane to heat water to use as the heat source which makes it a cleaner alternative to oil.

“When I was working with contractors out there to find (a replacement) oil-fired boiler, to get a price, they were like, why don’t you go with the LP fired?,” said Cook. “It’s cleaner, easier to get parts. We’ve had problems this year getting parts for our boiler here at the courthouse.”

The original estimated cost for this boiler was about $130,000. After getting bids, the lowest for the LP-Boiler was $94,200. This cost doesn’t include tanks and lines to hook it up. Refurbished tanks will be an extra cost of $7,127 for two 1,000-gallon tanks.

This project is one out of the 14 possible projects that the Prince Edward County Capital Improvement Plan (CIP) laid out in September of 2021.

The Board voted to proceed with the investment in the cannery. The Board approved to purchase the refurbished tanks at $7,127 and move forward with the LP-Boiler for the cannery.

• A public hearing was held for the redistricting. This was the first of two that will be held on this topic. No one signed up to speak. Sarah Puckett encouraged the Board to look at the map as they know their districts better than anyone.

• The Board revisited the request for a special use permit meat processing plant on Darlington Heights Road in Cullen. The conversation was tabled due to the plant seeking an alternative location after taking into consideration comments made by neighbors in its public hearing. The Board voted to table the conversation until the April meeting.

• Kimberley Allen, Director of Social Services provided an update. In April they expect the federal public health emergency to end. Renewals for Medicaid were put on hold in March 2020 and now many residents will have to go through the renewal process and some may no longer be eligible for care.

• Jeffery Jones, the solid waste general manager gave an update. They plan to put a pipe in at the convenience site of the Darlington Heights location to give cars and trucks more room to get in and out.

• Board approved the Virginia Telecommunication Initiative grant and appropriated 1 million dollars of American Rescue Plan Act (ARPA) funds for the Kinex Broadband Project and payment of the Commonwealth Regional Council invoice in the amount of $422,162.97. This project will bring broadband services to unserved and underserved areas in Cumberland, Lunenburg and Prince Edward County.

• The Board approved to work with CTA Consultants LLC to start Phase 1 of a study to assess the County’s public safety radio communications system. This will cost $38,950 and can use ARPA funds to help cover the cost. The current radio system used now has many holes that leave safety personnel unable to contact backup if help is needed. This study will show the best way to move forward in replacing the system.

• The Board voted to establish an employee committee that will choose an employee of the month to help boost morale. The perks include a reserved parking space, a $30 gift card to a local business, recognition at the next Board meeting and their name on an annual plaque. The total cost would be $360.

• During the Emergency Management update, Sarah Puckett gave the latest CDC information. Each week counties will have to calculate cases each Thursday for viewing on Fridays. The low, medium or high rating will tell if masks need to be worn inside. There are talks that all restrictions could be lifted or dramatically reduced soon, but time will tell. However, masks are still required in the courthouse due to a specific ruling that requires them to run differently.