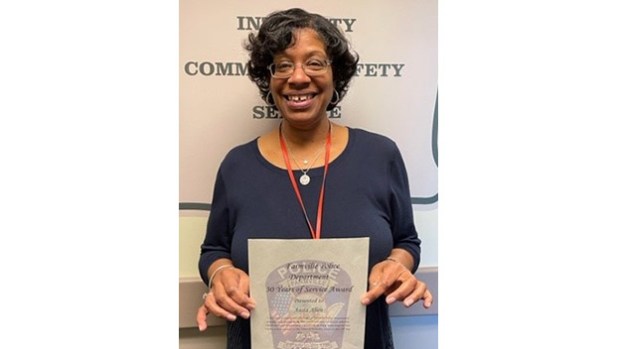 Administrative Assistant Anita Allen was given the An Award for her 30 years of service. 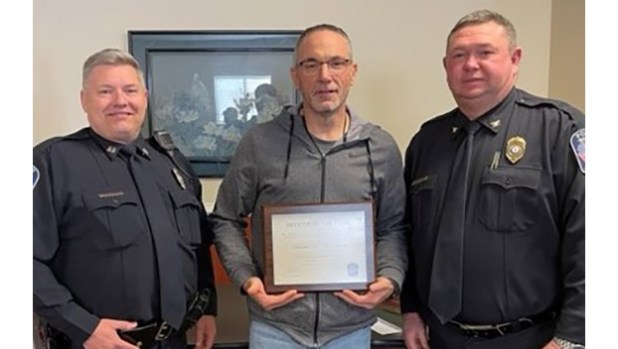 Detective B. H. Paulette was named officer of the year. Pictured from left are Bill Hogan, Paulette and Chief Andy Ellington. 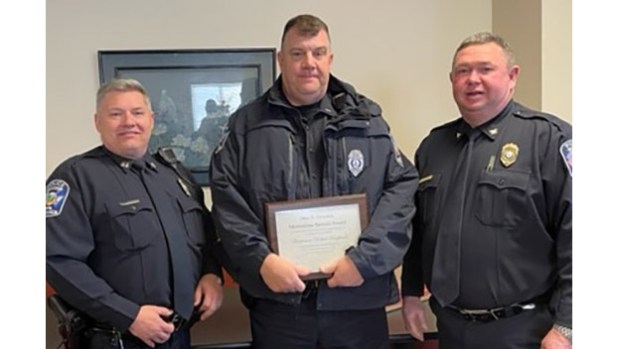 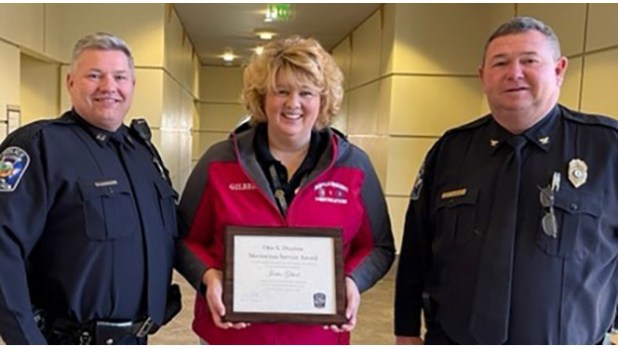 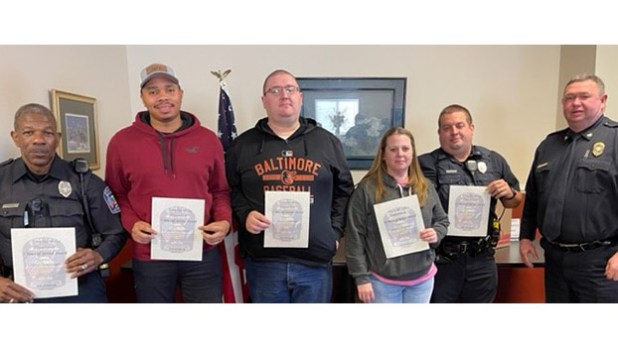 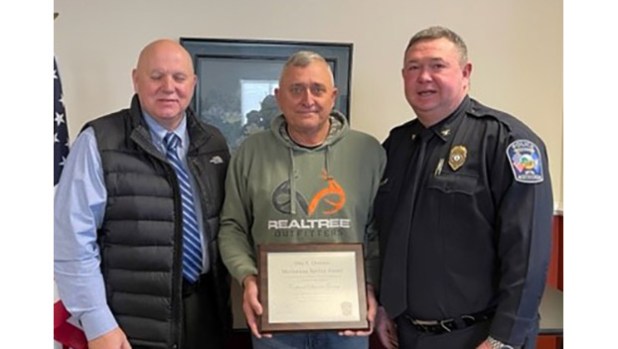 The Farmville Town Council held a work session on Wednesday, Feb. 2 to discuss business and acknowledge accomplishments in the Farmville Police Department.

With Mayor David Whitus unable to attend due to illness, Vice Mayor A.D. “Chuckie” Reid led the work session. The session began with a moment of silence for the two officers killed in the Bridgewater College shooting on Feb. 1.

Town of Farmville Police Chief Andy Ellington recognized the Officer of the Year, Detective B. H. Paulette. Each year this award is given to an officer nominated and voted on considering community involvement, commitment to the agency, superior performance with a specific difficult task or a complete and consistent body of work throughout the year that exceeds expectations.

“Detective Paulette continued to be a hard worker and has produced many quality cases with his assignment to the gang and drug task force,” said Ellington. “In addition to effectively working cases within the task force, Detective Paulette has stepped to the plate and assisted the department in the coverage of vacant shift assignments. In doing so, not only has he filled the void within the shifts, but he also surpassed all officers in the issuance of summons to include three DUI arrests.”

Ellington introduced new Farmville Police Officers Christopher West and Kyle Britton. Britton is a graduate of Radford University who previously worked with the state Department of Corrections as an officer before being promoted to sergeant. He then transferred to the District 24 parole office in Farmville and has now joined the police department. West graduated from Virginia Commonwealth University with a bachelor’s in criminal justice in 2019.

Ellington also announced an award that was given to three members of the department, the Otto S. Overton Meritorious Service Award. Cpl. Stewart Godsey, Lt. Bobby Ragland and 911 Communications Director Jackie Gilbert earned the award for this year.

This award, named after former Police Chief Otto S. Overton, recognizes exceptional service to the community for a particular task or assignment. Godsey was recognized for stepping in part-time to help out after his retirement following 30 years of service. Ragland and Gilbert were recognized for their hard and loyal work during the past two years of COVID-19.

“I just feel like they have gone above and beyond the call of duty the last two years, so at this time, I want to honor both of them in their service,” said Ellington.

• Michelle Watkins was introduced as the new administrative assistant for the Department of Community Development. She is a graduate of Prince Edward High School and has 17 years of experience in the field.

• The redistricting conversation continued with Melody Foster, who showed the council an updated map and changes made to Districts A, B and C. Ried mentioned again how he wants the community to be more aware of these changes and have a chance for input. The council agreed to put images of the original and changed map in the lobby of Town Hall for citizens to review and ask questions. A meeting will be held in a few weeks for citizens to give their input and concerns.

• Due to redistricting, candidate filing is complicated. When council members file their petition for candidacy, if it is signed by voters who will not be in their district anymore once the changes happen, they could be kicked off the ballot. Not much information is available at this time due to constant changes, but they may be able to stick to the core population that will remain in their district afterward.

• Further discussion was held about the uses of federal ARPA funds from COVID-19. A loss was shown of $820,000 that can be used in several areas. Once all funds come in, around $8 million will be available to use. The suggestion from Town Manager Dr. Scott Davis was to give a portion of the money as a bonus to those employees who stayed through COVID-19, but he also said that there are hidden water and sewage issues that will need to be taken care of too. The council agreed to revisit this in a future meeting after some discussion.

• The council voted to appoint Lee Pambid, the new development director, to the zoning administrator and the subdivision agent positions that Davis previously held.