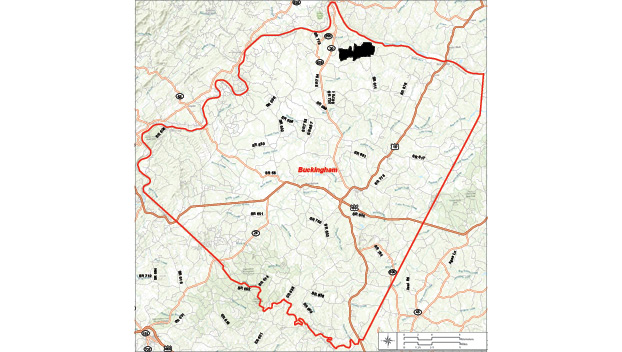 The map above of Buckingham County shows the location and size of the proposed River Stone Solar project in black.

Buckingham Board of Supervisors held four public hearings during its monthly meeting on Monday, Feb. 14, as well as planned a new one.

The board voted to host a public hearing on Feb. 28 to discuss a proposed solar farm on land owned by the Weyerhaeuser timberland company. Riverstone Solar, owned by Apex Clean Energy Inc., proposed a solar facility on nearly 1,963 acres that was endorsed by the Planning Commission after a Sept. 27 public hearing.

During the public comment period of the supervisors’ meeting, many citizens spoke about the project.

“Please take your time to thoroughly investigate the large industrial-scale solar project that is being sold to the county,” said Theodore Smith. “The community needs your due diligence to check references, evaluate the claims and promises of the salesman and understand the downfalls that this group will have on our community.”

Smith and Jane Moss filed a lawsuit in December due to an alleged lack of notice adjoining landowners received for the previous public hearing. He was one of 15 who mailed and emailed letters in opposition to the solar farm.

Other letters read during the hearing noted the effects the year-long construction would have on traffic and roads, and asserted that the noise will affect the livestock. The majority of the letters had the same message, urging the board to rethink the decision and vote no to the farm.

“Solar farms belong in industrial parks, not in our front, side and backyards,” said many letters. “Please vote no to protect us as members of Buckingham County.”

• Dr. John Keeler, interim superintendent of Buckingham County Public Schools, spoke again about the Community Center Classroom. After talking to the school board, he now has three alternative locations he plans to consider instead of the library and will give an update on the choice as soon as he has one.

• Scott Frederick, division resident engineer for the Virginia Department of Transportation, gave an update. VDOT is hearing a lot of complaints about unpaved roads due to bad weather. Crews can’t fix the roads until they dry out. They are still doing debris cleanup and have hired contractors to help.

• Presented a plaque to James “Dabney” Crews Sr. for his years of service on the Planning Commission.

• Michele Laaksone gave an annual report from the Southside Center for Violence Prevention. Laaksone spoke on expansions to the shelter including now having a second shelter for male victims.

• Tom Steger from Buckingham Fire Fighters Association sought permission to hold its annual Truck and Tractor Pull at the end of July. The request was approved.

• There was a public hearing for James Burmaster from Tax Map 158 Parcel 11 containing approximately 103.7 acres located at 5481 Mount Rush Highway, Dillwyn, James River Magisterial District, seeking a Special Use Permit for the purpose of operating an Airbnb bed-and-breakfast with events. The board unanimously approved the request with conditions.

The other Public Hearing was for the Buckingham Cattlemen’s Association at Tax Map 122 Parcel 4 Lot 3A containing approximately 5.03 acres located at 11851 W. James Anderson Hwy, Maysville Magisterial District. The board voted to approve to continue the agricultural and promote increased agricultural use.

• The board recognized Stephanie Roach’s resignation from the Board of Zoning Appeals. There are no recommendations at this time for a replacement.

• Cody Davis from the EMS asked for the appropriation of a $17,000 donation from Kyanite Mining. The funds will be used for sheltering supplies. The measure was unanimously approved.

• The board voted to refinance two loans due to the current low interest rates.

• The board voted to appropriate $33,146 from the Library of Virginia through the Circuit Court Preservation Program Item Conservation Grant.

• Sheriff Billy Kidd Jr. requested $27,415 in match funds to be appropriated to the Sheriff’s Budget in order to receive a grant of $54,830 from the U.S. Department of Justice, Bureau of Justice Assistance, to implement Body Worn Camera program, which carries a 50/50 match. There are more grants that the Sheriff’s Office will receive soon.

• The board affirmed actions from October 2019 for the county administrator to sign proper paperwork to keep the initiative of bringing a hotel to Buckingham moving. The initial action was delayed due to COVID-19.

• The board renewed the Buckingham Youth League lease agreement for Gene Dixon Park.

• The Board voted to transfer Hatton Ferry’s assets to Albermarle Charlottesville Historical Society to take it over.

• The board voted to have a public hearing for a solid waste fee ordinance for those out of the county who want to bring their waste to the county. The $25 fee will cover a sticker for nonresidents who wish to use the facilities.